Sort of Like Bailing Water Into a Sinking Boat - Why Do We Prop Up the Athabasca Tar Sands? 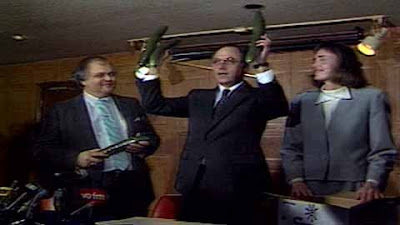 Who remembers Brian Peckford's 'pickle palace'? Just over 30 years ago, Peckford, then premier of Newfoundland and Labrador, decided to invest provincial funds, $22 million, to develop a hydroponic cucumber factory, Mount Pearl. As he put it, "Holy Smokes, let Newfoundland be first in something."

Well the project, as they say, 'came a cropper.' It was launched in 1987. It died in 1989. The greenhouse assets were eventually sold by the province for $1. Yeah, one dollar. It cost N&L taxpayers $27.50 per cuke at a time when cucumbers were going for fifty cents.

Peckford now lives on Vancouver Island, just down the road from my place. Yippee!

We don't do political screwups on that scale any more. Now we do them in multiples of billions. A fine example lies in the province next door, Alberta's Athabasca Tar Sands.

Like Brian Peckford's pickle palace, the Tar Sands have been on government life support for - well, forever. And, this time, it's not going to be a 20-million dollar write off. The worst part of this disaster is that Tar Sands operators, with the connivance of Alberta regulators, have transformed a vast tract of the province into a backwoods version of the Love Canal.

We're still pouring billions into the Tar Sands upkeep and operation. Justin Trudeau, his greenwash notwithstanding, is still committed to constructing the Trans Mountain pipeline. Then again, he owns the damned thing, having taken it off the hands of its private sector owners, former Enron boys who escaped indictment. He grossly overpaid for the pipeline and grossly underestimated the cost of the pipeline expansion. And for what? Why is the Liberal government doubling down on a horribly bad deal?

We have touted Canada's bitumen bounty to the point that it's seared into our brains. I cringed when Trudeau's predecessor, professor Mikey Ignatieff, heralded the Tar Sands as the "beating heart of the Canadian economy for the 21st century." The reality more closely resembles Brian Peckford's pickle palace on steroids.

When it comes to the Tar Sands the Alberta and federal governments do the same thing - they wildly inflate the bounty Canadians have received from Athabasca and wilfully understate the liabilities we have incurred. At the end of the day, those liabilities may well exceed every dime our governments have ever pocketed from the Tar Sands.

With so much red ink pouring over the balance sheets of Big Oil, it is easy to overlook a very bad bet made by Alberta regulators that could see Canadian taxpayers on the hook for billions in cleanup costs. A bill so high it would wipe out all the money bitumen mining ever flowed into government treasuries.

For reasons to be pondered by indebted generations yet unborn, the beleaguered Alberta Energy Regulator allowed the petroleum sector to pile up massive unfunded environmental liabilities on the dubious assumption that bitumen extraction would remain profitable for decades into the future. So towering is the tally of unreclaimed tailings ponds that it is possible the largest part of Alberta’s energy sector — heavily hyped as the economic engine of the nation — never actually made any money.

Bitumen royalties paid to the Alberta government back to 1970 total $49 billion. This sounds like a hefty sum, except when compared to unfunded cleanup costs. Officially the AER estimates total oil and gas liabilities to be $58 billion with only $1.6 billion held in securities. Leaked documents from the AER instead peg potential cleanup costs of the tailing ponds alone to closer to $130 billion.

Add to that many tens of billions more to remediate the thousands of orphan wells that dot central and southern Alberta and Brian Peckford suddenly looks positively astute.

With conventional oil giants now publicly planning for a very different future and bitumen royalties dwindled to only 12 per cent of what they were five years ago, isn’t it an appropriate time to make industry settle their tab before ordering more drinks?

Bitumen mining is not the only source of unfunded taxpayer risk accumulated under decades of friendly provincial oversight. The leaked AER presentation suggested an additional $100 billion in unsecured cleanup costs from conventional oil and gas plus another $30 billion from pipelines. Together with tailing ponds, this adds up to an eye-watering figure of $260 billion. At the current leisurely pace of reclamation, it could take 126 years to plug an estimated 180,000 abandoned wells left behind by a previously profitable industry.

Those numbers, horrible as they are, don't tell the full damage. They don't include the human cost, the lives lost to Tar Sands contamination.

Apart from the enormous environmental liabilities are very real human costs, particularly for Alberta’s original inhabitants. First Nations including the Mikisew Cree, Athabasca Chipewyan and Fort McKay have all been fighting for action on leakage of toxic tailings into the Athabasca River impacting their communities.

“Our members have been concerned about tailings pond leakage for years. We have observed changes in odour and taste from groundwater and surface water in our traditional territories,” said Melody Lepine, director, Mikisew Cree First Nation Government and Industry Relations. “We don’t trust groundwater sources and now bring bottled water with us everywhere.”

The human and economic costs of bitumen extraction will continue to climb long after the last oil boom is a distant memory. In the fullness of time it could well be that the so-called economic engine of Canada was not only a massive polluter and climate killer but a money loser as well.

Mr. Trudeau can don his father's buckskins but they don't fit him. He could, however, put on his long pants and put a stop to this bitumen madness. Sadly, unlike the guy who used to wear those buckskins, our prime minister didn't inherit the previous owner's courage or his wisdom.

Pierre Berton wrote of the Yukon gold rush that more money poured into the Yukon than the value of gold that came out. We don't learn. The get rich quick bug is attached to all mining ventures. Mining companies (including oil) know this and exploit it. Without taxpayer support most tar sands operations would fold.

I understand that it isn't the big bitumen producers that keep lobbying for the Tar sands; it's the spinoff companies who do it. They want the goose to keep laying golden eggs.

Yes, but a gold rush is in the nature of a lottery. Bitumen, we're still being told, is a "sure thing."

.. Bitumen, gas and coal are about all we have left.. don't let me get started on fisheries or forests.. Fully 97% of Canada's 'vast oil reserves' are Albertan black granular .. just like course brown sugar.. Tar Sands Bitumen

The rich gas fields in The Montney formations in Northwest Alberta, NorthEast BC are aimed at feeding the Tar sands, the USA and parts of Canada.. plus liquefaction and export from Kitimat someday soon

The high quality coal lies under mountain tops that must be removed in Alberta foothills territory.. where Jason Kenney is closing provincial parks where the mountain tops are

The whole concept and reality is a subsidized freakshow of foreign resource $$$$ extraction from Canada and leave us to be unable to ever clean - remediate.. (buffalo shall roam)

I put it at untold trillions Mound.. show me the bill for Boat Harbour or Grassy Narrows or that collapsed dam in BC..when they get around to them and I will comment further

I think our political parties have been so deeply invested in this delusion for so long that it's impossible for them to respond to these abrupt changes in fossil energy markets. When, even with government guarantees, nobody in the private sector will touch a major pipeline project so government takes over there's a pretty strong message in that.

I knew all along when they weren't diligent in making the Tar Sands operators put up cash for site remediation that this was a scam.

Nobody wants to be the one who has to say, "we were had. sorry"