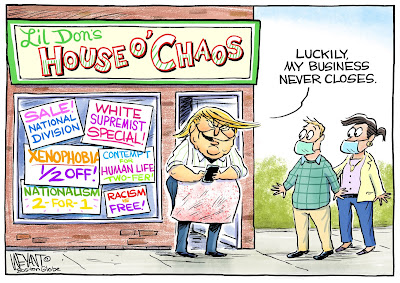 The fires that ravaged a migrant camp on the Greek island of Lesbos are a harbinger of a tsunami of migration in the years ahead as vast swathes of the world are rendered unviable, in some cases uninhabitable.

We don't know how many. Some predictions speak of tens of millions, some hundreds of millions. One I ran across yesterday predicted 1.2 billion people leaving their homelands by 2050. In essence, no one really knows because no one knows what the future holds.

20 years ago many would have laughed derisively at the suggestion that the Pacific rainforest could be swept by wildfires. It's right in the name - "rain"forest. I was flummoxed two years ago when wildfire spread through Washington State's Olympic peninsula. How could that be? That's how it is today.

In barely a month the EU and the UK will run onto the shoals of Brexit. Boris Johnson, whose Tory government is already reneging on some aspects of the agreement, says it'll be a good thing. The Irish can't see it. What they can see is a flare up of "the troubles" that plagued the Republic and Northern Ireland for generations. Scotland, meanwhile, watches warily, its finger on the trigger. Boris Johnson is a prime minister of great principle. He has so many he can effortlessly discard them in favour of others.

As the EU and the UK are still convulsing, Americans will select their next president, a new House of Representatives and one-third of the Senate. It should be the ultimate electoral shit show. The Russians are meddling. The Chinese are meddling. So too, we're told, are the Iranians. It's said the Russians want Trump back, the Chinese want Trump gone.

Four years ago people thought Trump would be laid low by the Access Hollywood tapes that had Trump talking about chasing married women and his amazing ability to just walk up to women and "grab them by the pu##y." What a deviant! Trump lost the popular vote but it wasn't enough to stop the Electoral College from appointing him president.

Now there are more audio recordings of Trump admitting that he deliberately misled the American public about the Covid-19 virus. A straight up admission of dereliction of duty. A choice that cost the lives of tens of thousands of Americans and the lasting injury of vastly more. Trump even invited his faithful supporters to flock to crammed airport hangars for rallies where they mingled, shoulder to shoulder, no masks for hours.

53 days until the election. Will it really matter what Trump was caught saying by the time November 3rd rolls around? Will his base care? Will Trump's hunchback Renfeld, Attorney General Bill Barr, ride to the rescue announcing criminal indictments of Joe Biden, Nancy Pelosi and Chuck Schumer? If the Trump campaign can't reverse the slide will they resort to other means to disrupt the election? The possibilities seem endless - and nauseating.

In a nation whose people are so angrily divided as America, what will ensue following the election? Will today's white nationalists, heavily-armed neo-nazis who brazenly infest the most peaceful protests, lose their minds if Trump loses his job? Will that be America's 21st century Fort Sumter moment? As a number of pundits are suggesting, is America already too broken to be fixed by a general election?

These are just a few examples of life in this era of revolving emergencies. We seem deficient in the will or the ability to effectively, even rationally, respond to these perils.

Will these emergencies slow down? Will we get some breaks that resemble what we used to consider normal? A chance to recharge our batteries, rebuild? I hope so. I think we all do.

.. I think we hold our breath re Trump Inc stealing this election
Then go with Plan A or Plan B.. and roll in the Covid-19 aspects
Maybe an asteroid will hit Trump and Pence
But mass Environmental Migration we should expect
At that point 'National Defence' will take on real meaning

All of these emergencies require collective action, Mound. Yet we are incapable of acting collectively.

Sal, conservative pundit, David Brooks, has an interesting column today in which he laments that the United States, like Trump, no longer has any heart.

"Through his own failures, Trump illustrates by counterexample that the heart is the key to understanding. To accurately size up a human situation you have to project a certain quality of attention that is personal, gentle, respectful, intimate and affectionate — more moving with and feeling into than simply observing with detachment.

"Maybe I spend too much time on Twitter and in media, but I see less and less of this sort of attention in America, even amid the tragedies of 2020. Far from softening toward one another, the whole country feels even more rived, more hardened and increasingly blind to lives other than our own."

I'm not particularly fond of Brooks, too often a Republican apologist. However I think he is accurate in his description of America's hopelessly calcified society. Even if the Dems sweep Congress and the White House the deeply divided society may remain mortally irreconcilable. What then?

A big factor, Owen, is that there's no uniformity to these emergencies. There's a deep discrepancy in how nations will experience these emergencies and when and how resilient or vulnerable they will be to one or all of these threats.

We have what I've come to call a 'latitudinal buffer' to some of the immediate emergencies, especially given our willingness to write off the Arctic. We have vast oceans to insulate us from mass migration and the US as a bulwark to the south, Latin America.

We can and are biding our time. In these emergencies time is a real asset. Would that we were putting that resource to good use to bolster our resilience, rehabilitate our essential infrastructure, reshape our economy and our society to withstand the shocks. Instead we're the little piggy with the straw house.