"Dystopia Now" - Will Pakistan Be the First Really Dangerous Country to Collapse from Climate Change? 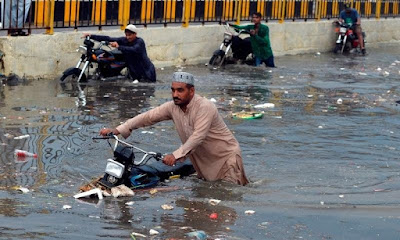 The world is changing faster than we imagine and most of the change will be lasting. There won't be a lot of 'bouncing back.'

The experts predict an upsurge in countries turning into failed states. One of these is Pakistan and it's already in the chamber, locked and loaded.

Pakistan today is a mess. It is a hotbed of Islamic radicalism. It has a military that operates a shadow economy. It has an intelligence service, the ISI, that often goes rogue and likes nothing better than to meddle in the affairs of Afghanistan. It has endured endless sectarian strife and conflict with its immediate neighbour, India. It also has a substantial arsenal of nuclear weapons.

Fatima Bhutto is a writer living in Karachi. She was the niece of Benazir Bhutto, a former prime minister who was killed by assassins. Her grandfather was Ali Bhutto, also a prime minister who was deposed in a military coup and hanged. She writes that, of all her country's problems, the most terrifying threat is climate change.

In August, Karachi’s stifling summer heat was heavy and pregnant. The sapodilla trees and frangipani leaves were lush and green; the Arabian Sea, quiet and distant, had grown muddy. When the palm fronds started to sway, slowly, the city knew the winds had picked up and rain would follow. Every year the monsoons come — angrier and wilder — lashing the unprepared city. Studies show that climate change is causing monsoons to be more intense and less predictable, and cover larger areas of land for longer periods of time.

On Aug. 27, Karachi received nearly nine inches of monsoon rain, the highest amount of rainfall ever in a single day. Nineteen inches of rain fell in August, according to the meteorological officials. It is enough to drown a city that has no functioning drainage, no emergency systems and no reliable health care (except for those who can pay). Thousands of homes and settlements of the poor were subsumed and destroyed, and more than 100 people were killed.

A traders association estimated that the submerging of markets and warehouses damaged goods worth 25 billion Pakistani rupees, or about $150 million. Local papers estimated that with Karachi at a standstill for a week, in some congested areas for longer, Pakistan’s gross domestic product suffered daily losses of $449 million — a number that didn’t include the enormous informal economy. The World Bank estimates that 15 percent of gross domestic product of the Sindh province (Karachi is its capital) is lost every year to environmental damage and climate change.

Pakistan is the fifth most climate vulnerable nation in the world. Between 1998 and 2018, according to the Global Climate Risk Index, the country is estimated to have lost nearly 10,000 lives to climate-related disasters and suffered losses amounting to about $4 billion from 152 extreme weather events in that period. Analysts have estimated Pakistan’s climate migrants over the past decade at around 30 million people.

Bhutto writes that Pakistan faces an existential threat from the retreat of glaciers in the Himalayas and the Hindu Kush. When they're gone the country will lose its most dependable source of freshwater. Droughts and famine will ensue. 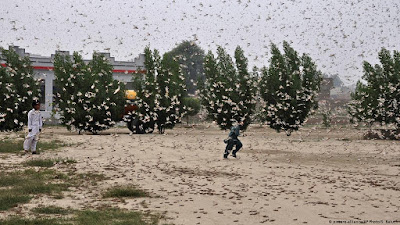 Temperature increases have brought plague after plague in rural areas. This year has brought Pakistan the most devastating locust infestations in nearly 30 years. The insects destroyed entire harvests, causing the government to call a national emergency as winter crops were decimated, resulting in losses of $2.5 billion. The locusts descend like a haze, so thick that from a distance it looked like a soft pink fog. Because of heavy rains and cyclones, there has been unprecedented breeding of locusts in the United Arab Emirates. They traveled to us from the Arabian Peninsula.

This is a climate war between the large industrial superpowers, financial predators that have polluted and poisoned our planet for profit, and the poor, who have done the least damage but will pay all of the consequences. Pakistan is responsible for less than 1 percent of global greenhouse gas emissions, but its people will bear the burden of the world’s deadliest polluters. If nothing is done to mitigate global greenhouse gas emissions, according to the World Bank, 800 million people in South Asia will be at risk of amplified poverty, homelessness and hunger.

We learned from the Arab Spring that climate change can cause food insecurity that can lead to unrest that can destabilize nations and topple governments.  Pakistan is a nation of loose ends and climate breakdown is a stress multiplier. 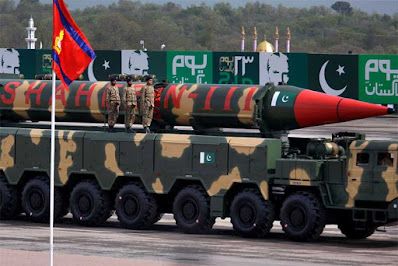 The Pentagon is deeply concerned about the security of Pakistan's nuclear arsenal and is said to have contingency plans to insert special forces into Pakistan to seize and secure the warheads, supposedly to keep them from falling into the hands of Islamic terrorists. Pakistan fears that Washington is really hoping to disarm it, leaving Pakistan at the mercy of hostile India. Because of the perceived threat, Pakistan is believed to now move the weapons around periodically by truck convoys from place to place.

Here is one assessment of the predicament facing the world from a South Asian nuclear exchange.

Pakistan and India may have 400 to 500 nuclear weapons by 2025 with yields from tested 12- to 45-kt values to a few hundred kilotons. If India uses 100 strategic weapons to attack urban centers and Pakistan uses 150, fatalities could reach 50 to 125 million people, and nuclear-ignited fires could release 16 to 36 Tg of black carbon in smoke, depending on yield. The smoke will rise into the upper troposphere, be self-lofted into the stratosphere, and spread globally within weeks. Surface sunlight will decline by 20 to 35%, cooling the global surface by 2° to 5°C and reducing precipitation by 15 to 30%, with larger regional impacts. Recovery takes more than 10 years. Net primary productivity declines 15 to 30% on land and 5 to 15% in oceans threatening mass starvation and additional worldwide collateral fatalities.

What ultimately prevented nuclear war during the Cold War was the confidence the Americans and the Soviets had that their adversaries were rational enough to not launch an attempted pre-emptive strike. Much of the espionage both sides undertook during those tense decades was responsible for building that very confidence.

However a destabilized Pakistan transitioning into a failed state would certainly undermine India's confidence and America's. Moscow and Beijing might not be content to watch from the sidelines. Small wonder the Doomsday Clock now stands at 100 seconds to midnight.