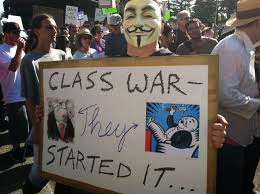 By 2020, the labor reduction effect of digitization will cause social unrest and a quest for new economic models in several mature economies. Near Term Flag: A larger scale version of an "Occupy Wall Street"-type movement will begin by the end of 2014, indicating that social unrest will start to foster political debate.

Digitization is reducing labor content of services and products in an unprecedented way, thus fundamentally changing the way remuneration is allocated across labor and capital. Long term, this makes it impossible for increasingly large groups to participate in the traditional economic system — even at lower prices — leading them to look for alternatives such as a bartering-based (sub)society, urging a return to protectionism or resurrecting initiatives like Occupy Wall Street, but on a much larger scale. Mature economies will suffer most as they don't have the population growth to increase autonomous demand nor powerful enough labor unions or political parties to (re-)allocate gains in what continues to be a global economy.

The Gartner assessment reinforces others (Chomsky, Hedges et al) who argue America has entered a pre-revolutionary state.  All the signs do seem to be there and they show no indication of abating.  To those who wrote off the Occupy Movement as finis, as I wrote at the time, the conditions that gave rise to OWM remained and stood to worsen, meaning that it would be back in some form and before too long.