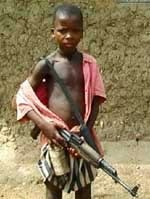 Although I'm a disbeliever it can be fun to imagine how the God we were taught to understand would deal with someone like Mikhail Kalashnikov.

MK begat the AK also known as the AK-47 assault rifle estimated to have killed more people than any firearm ever.  It's simple, it's reliable, it's cheap - it's ideally suited to Third World hellholes where armourers aren't in ready supply.  See some murderous thug in ill-fitting fatigues and, chances are, you'll see an AK-47 in his hand.  All too often you'll see it in the hands of some African kid.

MK has gone to the great arsenal in the sky, one day shy of his 95th Christmas on Earth.   By now, with his connections, he should be front and centre at the Pearly Gates.   What do you think of his chances?
Posted by The Mound of Sound at 9:08 AM

I read an interview with Kalashnikov a number of years ago. In answer to a question about how he felt about designing a killing machine that has wreaked such misery upon the world, he repied "I wish I had invented a more efficient lawnmower instead.".

I once worked with an evangelical who took a job with a weapons manufacturer (you could make more money working on weapon systems than you could working on civilian projects). I asked him if his decision was counter to his religious beliefs. He was confused by the question. I imagine people like him will also have some explaining to do at the Pearly Gates (if you believe that the Pearly Gates even exist).

I think he gets in. One could argue he evened the odds.
http://thinkingaboot.blogspot.ca/2013/12/death-of-gunsmith-mikhail-kalashnikov.html

If all else fails, Mikhail could always shoot the lock off...provided, of course, that he's closer than 150 yards

He should've died in 1944, the year before he started working on his death machine.