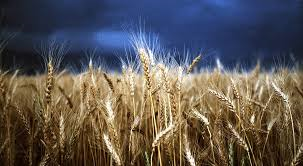 Food may run out long before the oil does.

A study by scientists at the University of Nebraska warns of "abrupt plateaus or declines" in industrial agricultural production.

As much as "31% of total global rice, wheat and maize production" has experienced "yield plateaus or abrupt decreases in yield gain, including rice in eastern Asia and wheat in northwest Europe."
The declines and plateaus in production have become prevalent despite increasing investment in agriculture, which could mean that maximum potential yields under the industrial model of agribusiness have already occurred. Crop yields in "major cereal-producing regions have not increased for long periods of time following an earlier period of steady linear increase."

The paper makes for ominous reading. Production levels have already flattened out with "no case of a return to the previous rising yield trend" for key regions amounting to "33% of global rice and 27% of global wheat production." The US researchers concluded that these yield plateaus could be explained by the inference that "average farm yields approach a biophysical yield ceiling for the crop in question, which is determined by its yield potential in the regions where the crop is produced."

They wrote:"... we found widespread deceleration in the relative rate of increase of average yields of the major cereal crops during the 1990–2010 period in countries with greatest production of these crops, and strong evidence of yield plateaus or an abrupt drop in rate of yield gain in 44% of the cases, which, together, account for 31% of total global rice, wheat and maize production."

Past trends over the last five decades of perpetually increasing crop yields were "driven by rapid adoption of green revolution technologies that were largely one-time innovations" which cannot be repeated. These include major industrial innovations such as "the development of semi-dwarf wheat and rice varieties, first widespread use of commercial fertilizers and pesticides, and large investments to expand irrigation infrastructure."

The study criticises most other yield projection models which predict compound or exponential production increases over coming years and decades, even though these "do not occur in the real world." It notes that "such growth rates are not feasible over the long term because average farm yields eventually approach a yield potential ceiling determined by biophysical limits on crop growth rates and yield."

Factors contributing to the declines or plateaus in food production rates include land and soil degradation, climate change and cyclical weather patterns, use of fertilisers and pesticides, and inadequate or inappropriate investment.

The new research raises critical questions about the capacity of traditional industrial agricultural methods to sustain global food production for a growing world population. Food production will need to increase by about 60% by 2050 to meet demand.
Posted by The Mound of Sound at 7:40 AM

the biggest problem will be water, and the corporations are degrading the supply and some other corporations like nestle are trying to take over the supply.
so the wealthy will be the only ones who can afford water, food and gas for their expensive vehicles.
The meek ( and poverty stricken, and the voiceless) dont inherit the earth, thats propaganda by the wealthy church goers, :P

If Monsanto has its way, that is exactly what will happen. Anyong

Just this morning I was talking with an old buddy, a highly successful venture capitalist in Toronto. We talked about the role big capital is playing in banking agricultural land on the Prairies. His firm is one of several competing to snap up every farm they can manage to buy. Farmland itself, not just the crops, has become the commodity.

He's a truly wonderful guy but he has no idea of the potential harm they'll be inflicting on our country.

the continued population growth will do nothing to help the current world situation. Much farm land will cease to be productive once it has been work out and there is a lack of water or too much water.

The climate is changing. Some may argue it is caused by humans. Some may argue humans aren't the cause. We only have to look at the sheets of ice falling into the ocean,. that will change the climate. The climate has changed in the past, when there were very few people on the earth. We need to get our act together to deal with the impending changes. that includes reigning in corporations. If we do not do so, there will be a few more wars than we currently have. The "free trade" agreements are going to be impinging upon a countries ability to control their own land and water. Not a good thing. if countries refuse to live up to these free trade agreements will we see wars fought over it.?

If a climate changes and there is a population of perhaps 10 million in North America, people will get by. They can move to other areas. With 350million in the U.S.A.; 35 million in Canada and who knows how many in Mexico, not so easy. then add in the pollution factors, you will hve people killing each other.

Most of us will be dead. so we either learn to play nicely or we die.

e.a.f. - you've written a prescription for chaos. That part is likely accurate. However trying to predict what will emerge from chaos is virtually impossible. Chances are high it won't be good.