In 1912, Americans Really Waged War on Christmas. The History of SPUG. 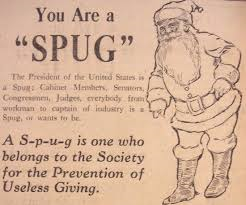 A little slice of history of Christmas Past.  In 1912, philanthropist August Belmont, created a new club, The Society for the Prevention of Useless Giving, or SPUG.  Even a century ago people were squandering money buying useless crap for Christmas presents.

The objective of SPUG, said Belmont, was to "eliminate, by co-operative effort, the custom of giving indiscriminately at Christmas, and to further in every way the true Christian spirit of unselfishness and independent thought, good-will, and sympathetic understanding of the real needs of others." 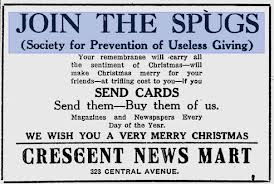 Though it might have been a radical idea to shun the cheap trinkets and easy mindlessly popular gifts beckoning from behind store windows, by December of 1912 thousands of 'Spugs' had joined the Society. Membership was so strong, that SPUG's 10 cent dues helped fund America's first community Christmas Tree ceremony in New York's Madison Square Park.

The idea caught on.  The New York Times liked it so much it created the first men's chapter, headed by that old Spugger himself, former president Theodore Roosevelt.

Col. Theodore Roosevelt is the head of the masculine branch of the Society for the Prevention of Useless Giving. The selection was not only appropriate, it was inevitable. No other American knows quite so much as Col. Roosevelt about the art and practice of giving, useless and otherwise. [...]

Promiscuous and needless Christmas giving, often enforced by custom, has been a growing evil. The good cheer of the season has been considerably diminished in many households for that reason. The society organized by Mrs. Belmont has useful work to do.

Oh yeah, before I go, Happy Winter Solstice!
Posted by The Mound of Sound at 12:27 PM