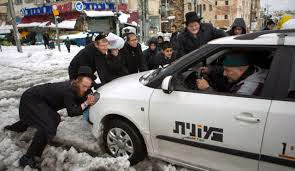 When it comes to climate change (or 'global weirding'), no place is sacred.   Jerusalem and, for that matter, a number of Israel's neighbours are experiencing heavy snow.  60 cms. in some parts of the Holy City.   It's worse in nearby Gaza where the locals are enduring floods.   Floods?  Gaza?  Ya got it.

At the other end of the world, a team of Australian researchers has found that global warming will generate El Nino events of increasing frequency and intensity.  That spells a future of more prolonged, severe droughts for the land down under.   Fortunately Aussies have elected a prime minister who thinks that's all nonsense and would prefer to pillage the Great Barrier Reef to speed up coal exports to China.

The United Nations Environment Programme has announced a major study of global land degradation and soil remediation efforts.  The U.N. Convention on Desertification has warned that soil degradation could reduce global food production by 12% over the next 35-years, triggering a 30% increase in food prices.

And, just when you've had your fill of climate change impacts, a new study links climate change with slavery.  Extreme weather events exacerbate poverty and tend to be accompanied by spikes in human trafficking.  This article from The Guardian, "hidden in plain sight" is an eye-opener on what forced labour looks like today and why it could be happening on your own Main Street.
Posted by The Mound of Sound at 10:31 AM