The Straight Goods on China and Japan - Maybe 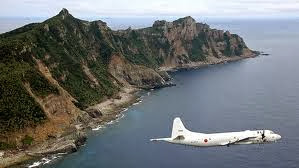 The western media has a clear slant on the tensions between Japan and China over Senkaku Island.  The name itself suggests it is Japanese.   The Japanese government even purchased it outright from its former owner.  Yet China keeps sailing its fleet around this big rock and has declared an air control zone over it.   Warplanes from China, the U.S. and Japan contest that airspace.   All three countries have warships running the waters.

To a westerner it looks like China is just out for another land grab, but is it?   Could there be another side to this story?  According to Asia Times' Pepe Escobar, there certainly is.

Let's start with the facts on the sea. Meiji-era documents prove without a doubt that the Japanese government not only admitted that these islands were Chinese (since at least the 16th century) but was also plotting to grab them; that's exactly what happened in 1895, during the first Sino-Japanese war, a historical juncture when China was extremely vulnerable.

After the Japanese occupation of China and World War II, Washington was in control of the territory. A document signed by the Japanese promised the return of the islands to China after the war. It was never fulfilled. In 1972, the US handed over their "administration" to Japan - but without pronouncing itself about who owned them. A gentlemen's agreement between Chinese premier Zhou Enlai and Japanese prime minister Kakuei Tanaka was also in effect. It was also ignored.
Geostrategically, it's even more complex. Virtually all of China's sea trade flows through choke points whose borders are either controlled by close US allies or nations that are not exactly allied with China.

Imagine yourself as a Chinese naval strategist. You look at the seascapes around you and all you see is what strategists call the First Island Chain. That virtual arc goes from Japan and the Ryukyu islands and the Korean peninsula, in the north, moving southwards via Taiwan, Philippines and Indonesia towards Australia. It's your ultimate nightmare. Assuming any serious confrontation along this arc, the US Navy will be able to move its aircraft carriers around and seriously compromise China's access to its oil transported via the straits of Malacca.
So from the point of view of our Chinese naval strategist, what is deployed is a sort of Reverse Great Wall, an expression, by the way, immensely popular in circles such as the US Naval War College. It's like an invisible sea wall from Japan to Australia that can in theory block China's access to the Pacific.

And if - and that's a major, long-term if - there ever would be a US blockade, with its sea trade lanes closed, the Chinese economy would be in tremendous trouble.
The fact is we don't hear or read much about the pressures Washington exacts on China.  The U.S. seeks to exclude China from multinational initiatives even in Asia.  It blocks Chinese access to technology.  It tries to draw China's neighbours into alliances.  It's effectively seeking nothing less than the containment of China, always a high risk policy against an up and coming world power.

Why does this matter to us?   Because Washington is playing with matches and, if the curtains should catch fire, we'll be expected to answer the alarm bells and that will probably mean turning out with our brand new F-35 light attack bombers.
Posted by The Mound of Sound at 10:13 AM