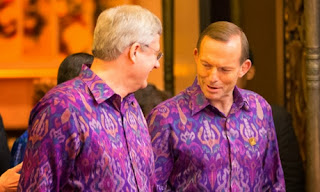 There's a sort of pathology at work in right wingers like Stephen Harper or his new Australian buddy, Tony Abbott.  They've both got the instincts of a wolverine inside a trapper's cabin.   They eat their fill and just piss all over anything left.

Abbott, shown above admiring our prime minister's nipples, hit the ground running when he took office dismantling Australia's climate change institutions and generally laying waste to the place, especially the Great Barrier Reef.  His Christmas gift to the Australian people has been his government's request to Unesco's world heritage committee to rescind the world heritage designation of a tract of 170,000 hectares of old growth forest in Tasmania.

The Abbott government's argument is that the designation is a "sham" because it includes plantation forest.  It does.  There's one hundred hectares of plantation forest that was included to provide habitat corridors for wildlife.
Posted by The Mound of Sound at 11:46 AM

The Progressive Era is a label applied to rather broad and sometime disparate attempts in the period from the 1900 through the end of World War I in 1918 to address economic and social reform.

Yes but it extended through WWII and into the postwar union movement that fostered North America's once vibrant and robust middle class. Theodore Roosevelt was an outspoken advocate for progressivism. So too was Franklin D. Roosevelt. It took two world wars and a great depression to do it but progressivism prevailed from the 40s until it was gradually dismantled from the 80s onward.