When You're Out of the Good Stuff, You Go For the RotGut 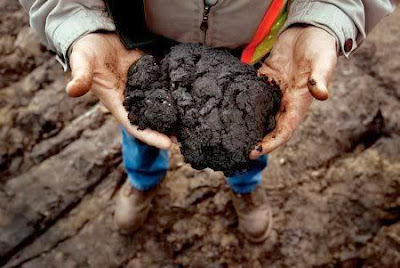 It's amazing what some people will drink when they can't find anything better.   These are usually what we call "problem drinkers."  Bad things come their way sooner or later.

When it comes to fossil fuels, however, we're all a bunch of rampaging sots.  And, unfortunately, we seem to be running out of the good stuff too.  A veteran BP geologist warns that "peak oil" is already here.

At a lecture on 'Geohazards' earlier this month as part of the postgraduate Natural Hazards for Insurers course at University College London (UCL), Dr. Richard G. Miller, who worked for BP from 1985 before retiring in 2008, said that official data from the International Energy Agency (IEA), US Energy Information Administration (EIA), International Monetary Fund (IMF), among other sources, showed that conventional oil had most likely peaked around 2008.

Dr. Miller critiqued the official industry line that global reserves will last 53 years at current rates of consumption, pointing out that "peaking is the result of declining production rates, not declining reserves." Despite new discoveries and increasing reliance on unconventional oil and gas, 37 countries are already post-peak, and global oil production is declining at about 4.1% per year, or 3.5 million barrels a day (b/d) per year:

"We need new production equal to a new Saudi Arabia every 3 to 4 years to maintain and grow supply... New discoveries have not matched consumption since 1986. We are drawing down on our reserves, even though reserves are apparently climbing every year. Reserves are growing due to better technology in old fields, raising the amount we can recover – but production is still falling at 4.1% p.a. [per annum]."

What Miller is saying is not that we're going to run out of energy but we are going to see a rapid decline in supply of affordable, conventional (relatively clean) fossil fuels.  It remains to be seen what this portends.   We might just have to pay a lot more for the really high-carbon fossil fuels or we might just come to our senses, stop subsidizing the stuff that's poisoning us, and finally transition to low-carbon and no-carbon alternative energy.  I guess it all depends on where we want our civilization to wake up in the morning.
Posted by The Mound of Sound at 9:30 AM

If oil production is falling, then the economy will not grow, since the economy needs abundant cheap oil.

Then, the Ponzi debt financial system will collapse, since it requires continuous GDP growth.

I'm not all that pessimistic about this, Hugh. If anything, shortages of cheap, conventional fossil fuel should accelerate the shift to alternative renewables. In cost they're awfully close already.

Once that shift begins it could trigger a landslide. An Oxford group warned Australia recently that its huge coal investment could, quite suddenly, become a stranded asset. We're running very similar risks with bitumen.

Hugh is correct. The infinite growth economy can not continue to grow with diminishing quality of energy. Alternative (or as I prefer to call them: derivative) energy is not nearly as cheap as we currently believe it is. The production and implementation of derivative energy is itself subsidized by fossil fuels.

This is why when talking energy return you must use energy ratios. It's not that we can't come to our senses, but rather that our current economic model will be broken.

(As you know I've covered this, that this breaking is inevitable and we are already being transitioned into a "new world order" economy of modern fuedalism)

The markets are rigged, prices are rigged, subsidies and government payoffs are rigged. No accounting today can be trusted, especially when its in devaluing currency. The real cost of living, the cost of industrialization, is being exported, is being borrowed against the future, is being fabricated.

I am actually conjuring up a post right now with a lot of new (updated) information from the energy world.

And now I realize I just misread your comment! It has been a long day.

DOWN WITH GDP! VIVA LA SANITY!

Merry, merry, Richard. It's been a damned, long year. It feels like a decade.

It really does! So many events, it's overwhelming.