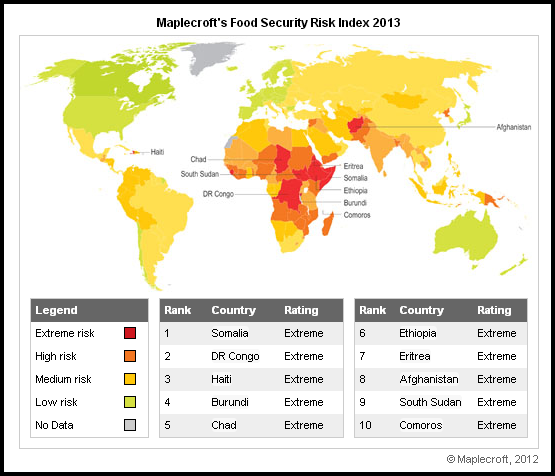 Last year the U.N. Food and Agriculture Organization declared what multinationals already knew, the world has entered a state of permanent food insecurity.  Around the world major corporations are snatching up agricultural land pretty much wherever they can find it and one of their favourite regions to exploit is Africa.

One-third of the Gambela area in western Ethiopia,[see map above], for example, is being leased for the next 50 years by the Bangalore food company Karuturi Global. Forests are being clear-cut, swamps drained, rivers diverted and whole villages moved to make way for flower farms and palm-oil and rice plantations.

The government in Addis Ababa says it needs foreign companies like Karuturi Global to help create jobs, raise Ethiopia's income from food exports, and develop the agricultural technology and infrastructure that can bring the impoverished country into the mainstream of the global market economy. It has enticed investors with tax breaks alongside rock-bottom lease rates.
But at what cost - to land rights, to human health, to the environment, to national stability?
It is a question being asked not only in Ethiopia but across Africa. Many other countries are also welcoming big agricultural projects bankrolled by foreign investors whose goal is to send food abroad. Liberia has reportedly signed concessions for nearly one-third of its national territory in recent years. Half of the Democratic Republic of the Congo's agricultural lands are being leased to grow crops, including palm oil for the production of biofuels. Perhaps the largest single venture to date is the ProSAVANA Project in northern Mozambique, where an area roughly the size of Switzerland and Austria combined has been leased by Brazilian and Japanese companies to produce soybeans and maize for export.

According to Olivier de Schutter, the UN special rapporteur on the right to food, the reverse transfer of agricultural wealth is a new form of colonialism. Outside powers, with the help of local governments, claim that they are helping countries develop, de Schutter says, when their real motive is to exploit resources to ensure their own food security.

Wealthy countries have always looked to faraway, resource-rich lands for food exports. Europe established plantations throughout the world in the 19th century; multinational food companies have done the same in the post-colonial era. But recent land grabs are different, and not just in scope. Whereas in the past, most export agriculture focused on products that couldn't be grown at home (bananas, citrus, coffee, cocoa), today's projects often grow staple food crops such as soy, wheat, and rice, as well as oils for biofuels.

The African land grabs began in earnest after the global food crisis peaked in 2008. The start of the Arab Spring was a wake-up call heard around the world - especially in the Gulf states and the Asian tiger economies with limited capacity to grow their own food. Corporations in these countries started acquiring terrain in Africa, the continent with the highest percentage of available arable land, as an insurance policy against extreme price volatility on the global market. And African governments, desperate for cash and technology, were willing partners. The United Nations has proposed basic ground rules to regulate these land deals, but they are non-binding and frequently flouted, leading to a chaotic situation.

This lack of effective regulation threatens the livelihoods and basic rights of millions. In a scathing 2012 report on Ethiopia's Gambela region, Human Rights Watch documented arbitrary arrests, rapes, beatings, and killings of people who resisted leaving villages to make way for foreign projects, as well as starvation among the newly landless. This hunger is caused in part by the diversion of agricultural land from local food production, which has boosted food prices.

To me, it's unbelievable that developed nations that pride themselves on their supposed civility and decency can turn a blind eye to this.   Canada, seemingly always ready to pick a fight or at least condemn if it involves a Muslim, sucks up to the same privileged countries that are inflicting this on the poorest and most vulnerable people on the planet.