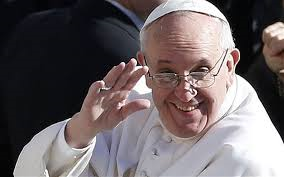 America's favourite open-mouth radio personality, Rush Limbaugh, has accused Pope Francis of being a Marxist.  The Pope responded to Limbaugh's accusation in an Italian newspaper interview published over the weekend.  Let's put it this way, he's not backing down.

Asked how it felt to be called a Marxist, Time Magazine's Person of the Year answered:

"The Marxist ideology is wrong. But I have met many Marxists in my life who are good people, so I don’t feel offended."

Pope Francis went on to reiterate his criticism of trickle down economics, saying it never benefits the poor, instead resulting in the rich simply keeping more for themselves:

"The only specific quote I used was the one regarding the “trickle-down theories” which assume that economic growth, encouraged by a free market, will inevitably succeed in bringing about greater justice and social inclusiveness in the world. The promise was that when the glass was full, it would overflow, benefitting the poor. But what happens instead, is that when the glass is full, it magically gets bigger nothing ever comes out for the poor. This was the only reference to a specific theory. I was not, I repeat, speaking from a technical point of view but according to the Church’s social doctrine. This does not mean being a Marxist."

There you go, Rush.  He's not a Marxist.  He's just a Christian.  I understand you can't tell the difference.  You never could.


Proverbs 26:4 NLT
New Living Translation
"When arguing with fools, don't answer their foolish arguments, or you will become as foolish as they are." - maybe Frankie don't read so good.

Haha, Mound, I gotta ask man. How do you do it? You turn out TONS of posts day after day. It takes me days for one (generally). It's frankly amazing :)

Well, Richard, I'm a retired guy with an intense curiosity. That leads me to spend a couple of hours most mornings visiting news, science and advocacy web sites. It's good to try to stay somewhat in touch with what's happening in the world and, after a while, what you can learn so freely online really can inform your conscience.

As for churning it out, I was a reporter for several years in Ottawa before drifting into law.

Blogging is a hobby and it keeps my mind engaged. Thank goodness I didn't take up darts or lawn bowls.

Well I'm sure that must help then haha. I'm also glad you didn't go after lawn darts. Between you and Common Sense Canadian I finally feel at least a few people are on the right track.

Ah, "lawn darts". Now that brings back memories. Kids my age played with them for hours or until they mistakenly skewered another kid through the skull. They were really popular just not for long.

I agree Mound is a must read on a daily basis. Keep up the great work.

I read Mound as often as I can. Great stuff. I suppose journalist background helps.

This pope is quit an improvement on his predecessors. He believes in social equality and that does not make him communist. Rush Limbaugh cannot be taken seriously. He is just a blabber mouth and full of it.

Pope Francis is going to be fun! The guy doesn't back off. he has an opinion and it would appear he favours the average citizen. Oh, dear Rushie is going to have an attack of something.

I stumbled onto the Mound by accident about 6 weeks ago and have been a regular visitor ever since. Great stuff!!

I never thought that I would ever like or agree with a pope, but this one is actually sounding like a human being for a change.

Marxists are areligious, so calling the pope a Marxist is just more stupidity from Rush.