Who Knew? Smog is Good. 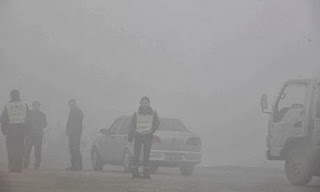 Well, it's not that it's all that good but it's not entirely bad either.   At least that's what the Chinese government was telling its people as a toxic cloud covered half the country.  Within every smoggy cloud lies a silver lining.

On Monday the website of China's state broadcaster CCTV published a list of five "unexpected benefits" brought by the crippling smog.

It said the haze had unified Chinese people, as they find solidarity in their complaints; equalised them, as both rich and poor people are vulnerable to its effects; enlightened them, as they realise the cost of rapid growth; and "made Chinese people more humorous", as smog-related jokes proliferate on the internet.

It had also helped to educate people, it said. "Our knowledge of meteorology, geography, physics, chemistry, and history has progressed."

I am getting the impression that the Chinese are going off the rails. Their latest big party conclave appears to have concluded they should go more neoliberal. WTF?

I don't think the Politburo is the sort of organization that's agile enough to simultaneously tackle a variety of major challenges. They may well be finding themselves overwhelmed.

It sounds almost Taoist of them, if Taoism wasn't frowned upon in China.

If you read the article in the original Chinese, it talks about how an environmental issue, haze, is helping wake up the chinese people politically, and drawing attention to the fact that economic growth at the expense of the environment is not necessarily all that everyone thought it was cooked up to be.

Not sentiments that I disagree with.

While teaching in China in 2007, the air pollution was so bad then, it was difficult to walk outside in it. I began to experience all sorts of health problems and had to leave. Many Chinese people also experienced breathing problems. South Korea is quickly cleaning up its pollution problems. However, they are inundated with air pollution from China especially in April when the wind is just right dumping what is called "yellow dust" over South Korea. Elementry schools are closed and the elderly are advised not to go out. I saw yellow dust as much as 3 cms thick on vehicles.