It Doesn't Sound Crazy Unless You Think About It. 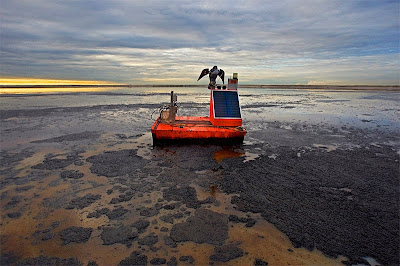 Stephen Harper has this knee-jerk instinct to deregulate just about anything he can.   Captain Listeria did a wonderful job handing self-regulation to the meat packing industry.  On his watch the safety regulations were gutted that allowed 42-residents of Lac Megantic to be immolated.  He's done something eerily similar on the west coast to fisheries and marine regulations.

We'll probably never really know exactly how many but quite a few Canadians have already paid with their lives as the price of living in Harperland.   And now what Steve did for the meat packing industry is going to be done for the Tar Sanders by Harper's provincial alter-ego, the Alberta government.

The Alberta government is handing over the regulatory responsibility for the province’s tar sands industry to a corporation that’s funded entirely by Canada’s oil, coal and gas industry.

The Alberta Energy Regulator (AER) is taking over the duties of the now defunct Energy Resources Conservation Board (ERCB) — which was funded in part by taxpayers — and Alberta Environment and Sustainable Resource Development. Previously, the ERCB was responsible for making sure “appropriate precautions are taken to develop oil sands resources in the interests of all Albertans…through regulation, reviewing applications, managing conditions and approvals, surveillance, and enforcement” — now, those responsibilities will fall to the AER. On top of that, according to the AER’s website, the AER’s duties include “allocating and conserving water resources, managing public lands, and protecting the environment while securing their economic benefits for all Albertans,” as well as administering Canada’s Water Act and Public Lands Act, dealing with fossil fuel-related spills, and approving or denying oil and gas permits.

It only sounds crazy when you think about it.

So everyone in the country, and everyone on this green earth, will be punished because we disagree with the insane Albertan ideology? That's just, well, that's just insane.

The young or junior ratlings learn from the experienced rats .. and the King rat is Stephen Harper with his rodent PMO and Privy swarms whipped by Ray Novak, Jenni Bryrne, Peter van Loan, Arthur Hamilton (oops, where did Arthur disappear to?) Stephen Lecce et al

We need a deck of cards with Harper Party pictures to keep track of the top 52 or 48 .. Queen Harper, Queen Baird etc .. who needs a King with Jacks like Kenney, Novak, Moore & Lecce