Christmas Is Always a Time For Family 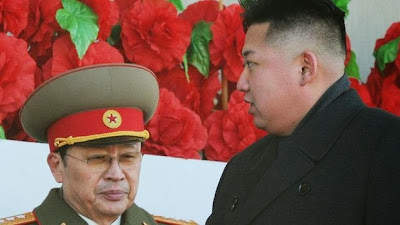 Maybe not always, at least if it's the family of North Korea's new bad boy, Kim Jong-Un.  He recently had his uncle topped for, oh who knows, wearing a better suit or having a more boyish figure, whatever.  But, when Kim waxed uncle Jang Song-thaek, it meant there wasn't going to be much under the tree this year for most everybody related to Jang either.  Some 300 of them have been rounded up by state security and sent to places from which they'll never return.

Although it is common in North Korea for family members of anyone found guilty of a crime also to be punished, the scale of the latest arrests underlines the lengths to which the country's new "Dear Leader" is going to eradicate his former mentor from the nation's history.

"At around 10pm on the night of [December] 13, the day after Jang was executed, armed men from the Ministry of State Security arrived in the Pyongchon area of Pyongyang, where a lot of his relations lived," a source in the North Korean capital told the Daily NK news website, which is run by defectors based in South Korea. "They took away a few hundred people. It was not just his close relations, but distant members of his family too, like relations of his father. In these circumstances, even his relations outside Pyongyang are not safe."
Jang, whose widow Kim Kyung-hui is a blood relation of the 30-year-old leader and has so far been spared the same fate, was charged with 24 abuses of power or contraventions of North Korean law, with the ultimate aim of overthrowing the leadership.

These ranged from "gnawing at the unity and cohesion of the party" to "dreaming different dreams" and "creating illusion about himself". Also accused of "committing irregularities and corruption that led to a dissolute and depraved life", having "improper relations with several women" and "squandering foreign currency at casinos", Jang was summarily executed.

As soon as he was arrested, relations and anyone with links to a man previously considered untouchable realised that the state's retribution had just begun. Execution is the likely punishment for his closest allies, while others face being dispatched to North Korea's labour colonies for the rest of their lives.

Some of those at risk are said to have volunteered to submit to "revolutionisation" by working in mines or on farms to avoid execution. "It seems like they are trying to take self-imposed punishment in order to evade a more stringent one, but they will find it difficult to escape," the Daily NK said.

"Jang's crimes are 'anti-party, counter-revolutionary factionalism', so they will have to say that his family challenged the system. For this reason, severe punishment awaits."

See, and you thought Harper was bad.

I'm not sure if you're familiar with Eric Margolis, who is generally quite knowledgeable of world affairs. Here's his opinion of what's going on:
http://ericmargolis.com/2013/12/kim-shows-his-fangs/

Hi Mark. Thanks for the link. If Margolis is right, who next will do China's bidding? Then again Margolis was working from supposition. His account was certainly plausible.

Give Harper another 5 yrs of 'majority' rule & his fundamental religious ideology would be quite capable of similar behaviour especially under some declared 'emergency'.