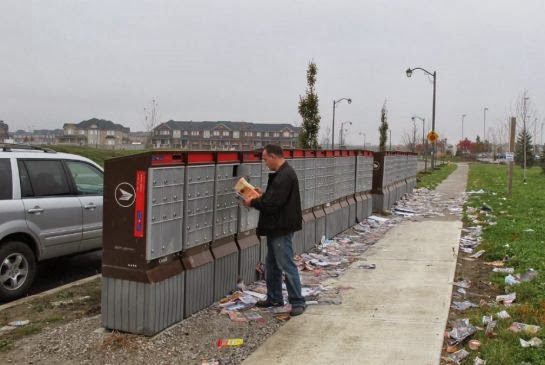 The photo in the Toronto Star was, to me at least, shocking.  It shows a community letter box station in Vaughan which, I understand, is near Toronto.   It seems to have a Stalinesque look to it of the very sort cultivated by our Furious Leader, Chairman Steve.   Could this really be what awaits urban Canada?

I don't get mail delivery to my door.  My neighbourhood has boxes similar to those shown here but they're grouped by threes, one serving each half of our street.  We don't litter.   There's nothing like what's shown here.  I know the people who own the homes around the mailbox.  None of us would think of dumping our junk mail on them.

What is seen here is a non-community mail station.   There's no trace of 'community' in it and that's obvious from the accumulation of littered junk mail.  It is pure, urban blight - Harper style.

This is one hell of a legacy for Stephen Harper.   It's only a matter of time before sites like this become known as "Harper boxes."  It's only fitting.

I get home delivery and have been that way for years. I hardly receive any letters as mostly they are bills for phone, power etc. I do communicate with relatives and friends by e-mail. The concept of community mail boxes pisses me off. It does not sound good. Now I can check my mail, in a very cold weather in my pajamas even -just sticking my hand out to the mailbox. Community mail boxes in urban areas are going to be a disaster.

Take another look at that photo, LD, and imagine what it looks like today under the latest snowfall. Imagine what it will look like after the snow melts.

It's one thing having to walk a hundred yards to get your mail. What this image shows is a mail centre that people need a vehicle to reach.

This is a typical Harper, technocrat blunder. There will be blowback and I would expect he'll reverse this policy before long.

There may be surprisingly little outcry. I want to be outraged and say "No, never, you'll pry this traditional service out of my cold, dead hands!" But I realized when I looked at my head, as it were, that my instinctive reaction was more like "I guess it's time to finally arrange to get the rest of my bills by email. Then I should be able to just never pick up my mail again, which means I won't have to deal with all the bloody junk mail. I suppose eventually my mailbox will explode, but it won't be at my house . . . "

If many people react like that, the prediction some have made that this will ultimately kill the postal service could come true.

Apparently, a big reason for this change is the pension scheme of Canada Post. People live a lot longer than they used to. And this problem is one shared by private sector companies as well (like car companies, airlines), that have been in business long enough to accumulate many pensioners, while not growing their own businesses sufficiently to keep up.

The government needs to realise that we're only just seeing the first signs of a problem that is going to get much worse.

If government were interested in supporting Canadian businesses, they'd think about relieving (or buying or guaranteeing) some portion of private pension plans, and expanding government pension plans, like CPP. It is not the companies' or pensioners' fault that Canadians are living longer in retirement. It is not something that can be easily planned for. And they shouldn't be forced to pay so much for this.

If companies didn't have to worry so much about their pension plans blowing up, they would instantly be more competitive. They'd be able to risk (in a good way) more capital in expanding and improving their businesses, rather than being very conservative in order to maintain mountains of cash and bonds to pay an army of future pensioners.

@ PLG - I hope you're wrong but fear you might be right.

@ Chris - thanks for your remarks. I never understood that dynamic.

The promise of a pension was to pool resources and get a good return on the investments so that pensioners would receive compensation when they retired.

I'm quite sure that some pension plan managers as well as companies did well when the system was gamed in their favour. And the pension plans were sold as being good for the employees.

The business should not be using pension money as capital.


As for the post office, wonder how much the Puralator division is making? Canada Post has really only lost money for one year. The head of Canada Post seems like he was placed to dismantle it. Wonder why he can be head of Canada Post and also moonlight for other firms... and at the salary that he has... shameful.

OK, as a radical I'd like to say: If a company has a plan in which it contracted to pay employees pensions, and then it turns out it cannot pay, cannot make good on that contract, then I think the reasonable outcome is that company just got a new set of owners: The pensioners and future pensioners whose contract is being violated.

No, it is not "pure, urban blight - Harper style".

If it was, you would also find it around your wonderful neighbourhood. But you proudly boast that: "None of us would think of dumping our junk mail on them."

Which behoves reference to individual people as being responsible for piggish messes ---- not Harper.

Put the blame where the blame belongs: the BIG CITY.

You said it: urban blight. That has nothing to do with whoever is the boss; it has to do with the attitude of neighbours, as they stand there at the mailbox.