What If China Had to Compensate Us for Infectious Diseases? 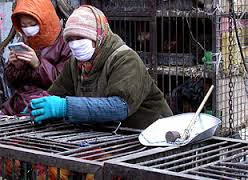 Just about every year there's some form of influenza outbreak in China.  Swine flu, avian flu, Hong Kong flu - it always seems to be something.

Over the years there have been many accounts of how flu virus in livestock and poultry mutates and spreads to humans supposedly because many Chinese live in close proximity to their animals.  Eventually the bug reaches a city, finds a traveller about to board an airplane overseas, and the rest is history.

We're told that, some day, we're going to get a real bugger of a flu virus, super-contagious and super-deadly, that could rival the influenza epidemic that swept the world at the end of WWI.

If the root cause of these annual epidemics is Chinese farmers living in too close proximity to their animals, isn't that something the Chinese government should be addressing?  Shouldn't they be regulating against this sort of thing?  And, if they won't, shouldn't China be dipping into that mega-sovereign wealth fund to compensate other countries for their medical costs, lost wages and physical suffering from annual, preventable disease?

Now do you actually believe the Chinese government cares about its citizens dying??? Get a grip. They kill their own, so they don't have any problem having citizens of other countries die. There are always more people.

Remember when all the children died because melamine was put in the milk,. Remember when a large earthquake killed so many children in school because the buildings didn't hold up.

With a population of over a billion the Chinese government really doesn't care what happens to its own citizens. Those people who live in other countries aren't even on their radar.

The best we can hope for is, when there is a flu outbreak in China the rest of the world closes its doors to them, including all their exports. I don't expect to see that ever happen. if nothing else, Wal-Mart simply won't allow it.