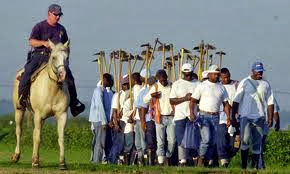 From Le Monde, a look into how Louisiana parlays prison into profits resulting in an 'incarceration dependency' and the abuse of the imprisoned.

The number of people in US prisons fell in 2012 by around 30,000, the third consecutive fall in as many years: budget difficulties mean that states can no longer afford incarceration for every offence, and at local level Republicans and Democrats are, unusually, unanimous on the need to decongest prisons. In California — which accounted for half of the fall in 2012 — and Texas, there is a drive to reduce sentences and find alternative punishments.

In Louisiana, however, writing a cheque that bounces still carries a sentence of up to 10 years in prison, and the minimum sentence for a repeat burglary offender is 24 years without parole. The incarceration rate has doubled in 20 years, rising to a level unmatched in the world; more than 44,000 people are behind bars (one in 86 adults) — double the national average and 13 times more than in China.

The economic survival of entire areas depends on this high rate of incarceration. In the early 1990s Louisiana had a choice of solutions to the overcrowding problem; it could either reduce sentences or build more prisons. It chose to build more prisons but, owing to a chronic budget deficit, could not afford to. So it encouraged the sheriffs of rural counties (known as parishes in Louisiana) to build and run their own prisons — or parish jails. Building a jail is a major investment for a rural parish. The state pays the sheriffs $24.39 per inmate per day, to cover detention costs, whereas a prisoner in a state prison costs the taxpayer $55 per day. Louisiana has 12 state prisons (reserved for very long sentences), but 160 local jails scattered across remote parishes with Cajun-sounding names such as Acadia, Bienville, Beauregard and Calcasieu.

Incarceration creates jobs, and the rural population, which has suffered severely from the cotton crisis, is directly dependent on them. “In rural parishes, where the economy is depressed, it has become a business,”said Burk Foster, criminologist and visiting professor at the University of Louisiana at Lafayette. For many local people, the best chance of work is as a prison guard. It’s poorly paid, at $8 an hour, but the pension is good.

Bed occupancy needs to be high to maximise return on investment. Otherwise, the jail will cease to be profitable and will have to lay off guards or even close. “It’s almost like building a hotel. To keep a jail profitable, the sheriff needs to keep beds occupied,”said Cindy Chang, formerly a journalist with the Times-Picayune. Every morning, parish jail wardens have their staff phone around to secure a few prisoners from overcrowded penitentiaries in big cities such as New Orleans or Baton Rouge.

Trying to generate a profit on $24.39 per prisoner per day means paring costs - and inmate living conditions - to the bone.

“After maintenance expenses, staffing and profits for the sheriff, there is not much left for the inmates,” said Foster. “They sleep in 80-man dormitories. The food is cheap and medical care is poor.”

What is this but social cannibalism, the community eating its own?
Posted by The Mound of Sound at 10:20 AM

I honestly don't know what to say. I am stunned. Back in the early seventy's and as an avid reader of science fiction I had a very positive outlook for the human race. I had faith in our government and it's institutions. My mother(born in Warsaw 1930) told me that I was stupid to believe that the government had MY(our) best interests at heart. However as a child of the sixty's with stars in his eyes I thought we had come so far and learned so much from hitler, until harper(I refuse to capitalise his name) harper = hitler . Very similar names and very similar ideologies.. I spit in harpers face!!!! Except he is not even worth one drop of my saliva, it actually has a use, unlike him! I loath steven harper. He is the only human that can say that about....!!!! I would prefer Kim Jong Il . at least he has an excuse for his ignorance. I feel sorry for harpers children.


For more on this and the Land of the Free, read this article.

We all thought that way in the 60s, astone. Then Reagan, Thatcher and Mulroney came in and ushered in the ugliness that has metastasized for the past three decades.

@ Anon. Thanks for the link. Very interesting. Louisiana is indeed the "Inmate State."