Hey, Steve. They're Coming Back.

Although the Russian economy has been stagnant of late, Moscow (a.k.a. Vlad Putin), continues its major rearmament programme.  Here is the Russkie's newest "boomer" or nuclear missile sub. 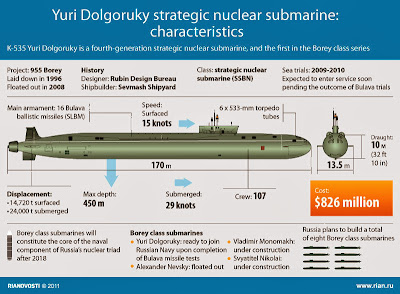 The Dolgoruky is the first of eight Borei-class boats that are planned to deploy with the Russian navy. The sub uses  pump-jet propulsion.   It will carry Russia's new Bulava missiles said to have a 10,000 km. range.   That should be about all they would need to do in Europe and North America.

In addition to the boomers, the Russians are deploying a like number of nuclear-powered  cruise missile subs that will also carry the Shkval torpedo capable of speeds underwater in excess of 200 knots (370 km/hr) at up to 10 mi. range.  It's generally considered a "carrier buster" weapon. 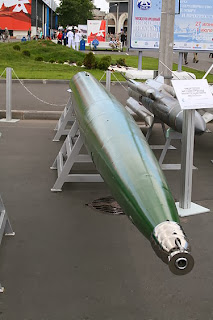 Meanwhile, President Vlad, has ordered the Russian military to resuscitate its Arctic presence by next year.   That will entail new naval facilities and re-opening several air bases that have been mothballed since 1993.

Russian Defense Minister Sergei Shoigu said Tuesday that a combined-arms force will be deployed in the Arctic in 2014 to protect the country’s interests in the region.

As part of the ambitious program, the Russian military is planning to reopen airfields and ports on the New Siberian Islands and the Franz Josef Land archipelago that were mothballed in 1993.

Shoigu said that at least seven mothballed military airfields on the continental part of the Arctic Circle will also be restored.

As for Canada, we're pretty much defenceless.  Thanks Peter, thanks Steve.   With our short-range, single engine, stealth light bomber we probably won't be able to reach out and touch the Russians without either slinging all sorts of stealth and performance-negating weapons and fuel tanks under the wings or operating with very detectable refueling tankers.   And, if we did see fit to attack something in Russia, it would be a safe bet we wouldn't have an airbase for any survivors to go back to.

If this is indeed true? Harper doesn't need a military, in the High Arctic. Harper has been gutting Canada's military.

Well, Anon, we should take notice of Beijing's proclaimed policy of establishing an armed presence in the Arctic to secure China's economic and political interests.

China is not an Arctic nation but it intends to maintain a military presence there.

But Canada has the tactical advantage of surprise provided by our stealthy snowmobiles....

Yes, indeed, I forgot about that. Hmm, I wonder how those things work when there's no snow or ice?

It's not like we're going to have a direct conventional war with Russia. People talk as if MAD went away. It didn't.