Who Knew? Well, As It Happens, They Did. Calgary Flood Warning Ignored. 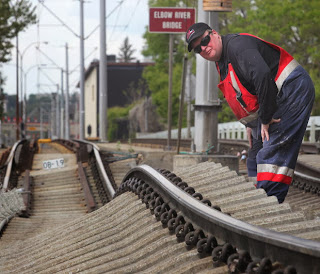 In the wake of last summer's mega-flood in Calgary, Alberta's enviromin was quick to absolve herself and her government, claiming nobody could have seen it coming.

That wasn't quite right.   What Diana McQueen should have said was that nobody in her government chose to see it coming.  They could have seen it coming.  They had a report that told them it was coming and the spots likely to be hardest hit.

One year before flooding devastated Calgary, officials were given a study that warned the next big flood to hit the city would bring higher water levels and more widespread damage than was previously thought, CBC News has learned.

The analysis of the Bow and Elbow rivers began in 2009 and finished in 2012. It was commissioned by the provincial government and the city, but not publicly released.​

That study flagged the Bonnybrook Wastewater Treatment plant and several communities as being at risk — correctly, it turned out.

John Pomeroy, Canada's Research Chair in Water Resources and Climate Change at the University of Saskatchewan, said the report was a comprehensive update on previous studies, recalculating flood probabilities based on population growth along the floodplain.

"The increase in the area inundated was quite striking. The Centre Street area downtown, of course, and the area around 14th Street, the Bowness area, also as soon as you start to involve sewage treatment plants in the 1-in-100-year floodplain, that's a big concern,” Pomeroy said.

Calgary-Shaw Wildrose MLA Jeff Wilson said his heart sank a little when he read the report.

"It felt rather bizarre reading it, almost like it was a road map for what we saw happen in the city this spring. It was almost eerie,” he said.
Posted by The Mound of Sound at 12:12 PM

Science works. Who knew? Certainly not Conservatives, who have been spending masses of money and energy trying to pretend it doesn't.

Just one more example of the Fiscal incompetence of that party.

Rather than deal with the issue, they stick their collective heads in the ostrich hole.

They only pop up for brief periods to scream diatribes of dogma at those who actually use scientific research to suggest problems with the current course of action.

Anyone else see a trend

Something else you may find interesting. Alberta uses mostly coal fired electricty except for the Southern Medicine Hat area and it isn't cheap.