“We as a species have never experienced 400 parts per million
of carbon dioxide in the atmosphere.
We’ve never been on a planet with no Arctic ice,
and we will hit the average of 400 ppm... within the next couple of years.
At that time, we’ll also see the loss of Arctic ice in the summers…
This planet has not experienced an ice-free Arctic
for at least the last three million years.” 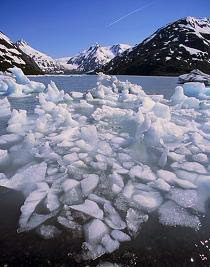 That's a pretty blunt warning coming from Guy McPherson, professor emeritus of evolutionary biology, natural resources, and ecology at the University of Arizona.  He's worked on the climate change front for 25-years.  We have entered a permanent climate unlike anything experienced in the history of our species.
Tomgram's Dahr Jamail writes of a growing segment of climate scientists who are concluding that we may have already slipped over the edge of climate change cataclysm.
Some of them even think that, if the record ongoing releases of carbon dioxide into the atmosphere, thanks to the burning of fossil fuels, are aided and abetted by massive releases of methane, an even more powerful greenhouse gas, life as we humans have known it might be at an end on this planet. They fear that we may be at -- and over -- a climate change precipice hair-raisingly quickly.
Some scientists Jamail interviewed suggested we're already locked into our planet's sixth mass extinction, comparing what's going on today to the Permian mass extinction that wiped out 95% of all forms of life.
We are currently in the midst of what scientists consider the sixth mass extinction in planetary history, with between 150 and 200 species going extinct daily, a pace 1,000 times greater than the “natural” or “background” extinction rate. This event may already be comparable to, or even exceed, both the speed and intensity of the Permian mass extinction. The difference being that ours is human caused, isn’t going to take 80,000 years, has so far lasted just a few centuries, and is now gaining speed in a non-linear fashion.

It is possible that, on top of the vast quantities of carbon dioxide from fossil fuels that continue to enter the atmosphere in record amounts yearly, an increased release of methane could signal the beginning of the sort of process that led to the Great Dying. Some scientists fear that the situation is already so serious and so many self-reinforcing feedback loops are already in play that we are in the process of causing our own extinction. Worse yet, some are convinced that it could happen far more quickly than generally believed possible -- even in the course of just the next few decades.

According to a NASA research report, “Is a Sleeping Climate Giant Stirring in the Arctic?”: “Over hundreds of millennia, Arctic permafrost soils have accumulated vast stores of organic carbon -- an estimated 1,400 to 1,850 petagrams of it (a petagram is 2.2 trillion pounds, or 1 billion metric tons). That's about half of all the estimated organic carbon stored in Earth's soils. In comparison, about 350 petagrams of carbon have been emitted from all fossil-fuel combustion and human activities since 1850. Most of this carbon is located in thaw-vulnerable top soils within 10 feet (3 meters) of the surface.”

The big concern is a rapid release of Arctic methane that could be a civilization ender.   The figure you need to keep in mind is 240-gigatons.   That is the amount of atmospheric carbon our species has emitted since the beginning of the industrial revolution.

A study published in the prestigious journal Nature this July suggested that a 50-gigaton “burp” of methane from thawing Arctic permafrost beneath the East Siberian sea is “highly possible at anytime.” That would be the equivalent of at least 1,000 gigatons of carbon dioxide.

Even the relatively staid IPCC has warned of such a scenario: "The possibility of abrupt climate change and/or abrupt changes in the earth system triggered by climate change, with potentially catastrophic consequences, cannot be ruled out. Positive feedback from warming may cause the release of carbon or methane from the terrestrial biosphere and oceans."

Being naturally self-centred, we keep wondering what the future holds 10, 20 or 30 years from now.  We simply ignore the long-term impacts of what we've already done.

A briefing provided to the failed U.N. Conference of the Parties in Copenhagen in 2009 provided this summary: "The long-term sea level that corresponds to current CO2 concentration is about 23 meters above today's levels, and the temperatures will be 6 degrees C or more higher. These estimates are based on real long-term climate records, not on models."

Jamail references comments made by a B.C. wildlife biologist in my town's local newspaper, the Oceanside Star.   Neil Dawe was chronicling the state of the Little Qualicum River estuary for the Canadian Wildlife Service and what he observed left him in no mood to pull punches.  He said he has seen the "unravelling of the web of life."

The Douglas fir and Sitka spruce are all but gone. The life-giving grassy carex, as Dawe and fellow biologist Andy Stewart reported in 2010, is being stripped from the estuary by resident Canada geese at a rate of 15-18 metric tonnes a year.

"Most of these plants here now are invasive species," he says.

Indeed, in his 35 years of studying what is supposed to be a wildlife sanctuary, it has almost all changed, and it no longer supports the life it once did.

It looks green and serene but to Dawe, "It's a veritable desert here."

"Economic growth is the biggest destroyer of the ecology," he says. "Those people who think you can have a growing economy and a healthy environment are wrong. "If we don't reduce our numbers, nature will do it for us.

"He isn't hopeful humans will rise to the challenge and save themselves.

"Everything is worse and we're still doing the same things," he says. "Because ecosystems are so resilient, they don't exact immediate punishment on the stupid."

Jamail concludes that, while we keep debating the consequences of the buildup of our carbon emissions, methane may settle the question for us.
...long before humanity has burned all fossil fuel reserves on the planet, massive amounts of methane will be released. While the human body is potentially capable of handling a six to nine degree Celsius rise in the planetary temperature, the crops and habitat we use for food production are not. As McPherson put it, "If we see a 3.5 to 4C baseline increase, I see no way to have habitat. We are at .85C above baseline and we've already triggered all these self-reinforcing feedback loops."

He adds: "All the evidence points to a locked-in 3.5 to 5 degree C global temperature rise above the 1850 ‘norm' by mid-century, possibly much sooner. This guarantees a positive feedback, already underway, leading to 4.5 to 6 or more degrees above ‘norm' and that is a level lethal to life. This is partly due to the fact that humans have to eat and plants can't adapt fast enough to make that possible for the seven to nine billion of us—so we'll die."

As for hopes of a planet-saving climate change deal in 2015, even top U.N. officials have given up any hope of that.

The three living diplomats who have led U.N. climate change talks claim there is little chance the next climate treaty, if it is ever approved, will prevent the world from overheating. "There is nothing that can be agreed in 2015 that would be consistent with the 2 degrees," says Yvo de Boer, who was executive secretary of the United Nations Framework Convention on Climate Change in 2009, when attempts to reach a deal at a summit in Copenhagen crumbled. "The only way that a 2015 agreement can achieve a 2-degree goal is to shut down the whole global economy."

In short, we've become Easter Islanders only on a global, civilizational scale.  These warnings are dire but it's far from clear that they're unduly pessimistic.   Those who have only followed the progress of climate science for the past ten or fifteen years have already seen, repeatedly, that seemingly grave forecasts are quickly proven unduly optimistic, overtaken by events, blindsided.

In excerpting portion's of Jamail's report I omitted parts that struck me as simply too dreary or alarming to repeat.  He made it plain that many of those he interviewed would be seen as climate science pessimists.  Yet he points out they're not that far away from climate science orthodoxy - five or ten years here, half a degree there.

Even the titans of industry appear to be ready enough to acknowledge the need for massive, transformative change - but just not yet.   They're locked into an addict's mindset.   There will always be time for just a little more.  Let's take another look in five years or ten years, maybe then.  They cannot and will not recognize that time is not on our side.  This is captured neatly by the title of McPherson's blog - Nature Bats Last.

We can never say that we weren't told.

but how to fix it when govts hamstrings the people, the scientists and really, big oil(by enabling their bs).
Until there is investment in green energy(that allows corporate wealth, sad but true) were going to continue on this trajectory as the harpers wont change.

Deb, save for the Greens, none of our federal parties is willing to act on this. They won't even acknowledge the severity of the problems that confront us today much less the far darker future that awaits our kids and grandkids.