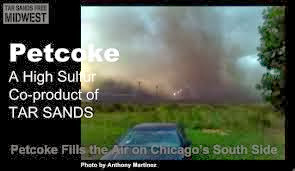 Chicago has got an Athabasca problem - mountains of petcoke, the standard detritus of refining Alberta bitumen.   According to Chicago's mayor, it's time to store that crap indoors.

Mayor Rahm Emanuel (D) announced on Thursday that the city will require piles of petcoke, coal, and other fossil fuel-related nasties to be stored indoors or under covers. That would mean an end to the open outdoor piles that currently send filthy particles billowing over surrounding homes. From a press release put out by the mayor’s office:

"The proposed regulations will require large bulk material storage facilities to fully enclose solid materials such as coal, pig iron and petcoke, while facilities with smaller storage capacity and smaller deliveries would be required to install wind barriers as protective measures and adopt other best management practices. The draft regulations will be posted for public comment until January 24, 2014, and the City and Alderman John A. Pope will host a public hearing in the 10th ward in mid-January."

Emanuel is stepping in as a BP refinery in nearby Whiting, Ind., dramatically increases its output of petroleum coke, a powdery byproduct of heavy oil piped from the tar sands region of Alberta. All of the petroleum coke, or petcoke, produced at Whiting is shipped across the state border to a pair of Chicago sites owned by KCBX Terminals, a company controlled by industrialists Friedrich und Dieter Koch.

Companies have stored bulk materials in the area for decades. But as uncovered piles of petcoke grew larger this year, residents in the East Side and South Deering neighborhoods increasingly complained about gritty black clouds that spoiled summer picnics and forced parents to keep their children inside with the windows closed.

According to Grist, while petcoke is too filthy to be legally burned, American utilities have discovered you can get away with it if you just add it in with other fuels.

This is just the start of a big game of Whac-A-Mole that will play out across the nation as such piles pop up in growing numbers. The petcoke is residue left behind after heavy tar-sands oil from Canada is refined, and more and more of that oil is being imported into the U.S.

Petcoke is too dirty to be burned alone in U.S. power plants to generate electricity, but some power companies are starting to mix small quantities of it in with the coal they burn. How’s that for a filthy fossil-fuel double whammy.

Thank you Alberta.  Thank you Ms. Redford.  Thank you Mr. Harper and a real big thank you to the Koch boys.
Posted by The Mound of Sound at 10:56 AM

In which Rahm Emanuel is distressed to discover there is, as yet, no way to completely seal off the air the wealthy breathe from everybody else's.