And So It Goes

Think of them as the rectal thermometer of our oceans and lakes - algae blooms and blankets of seaweed.  When they start showing up, en masse, on your coast and your beaches they're telling you that the ocean has a fever, it's really sick. 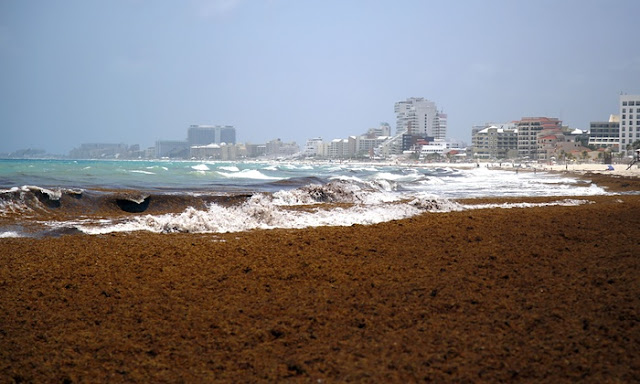 That's the waterfront of the Mexican tourist Mecca, Cancun.  Apparently the stench is appalling, bad enough that tourists are canceling reservations.

The picture-perfect beaches and turquoise waters that people expect from the Caribbean are increasingly being fouled by mats of plant matter that attract biting sand fleas and smell like rotten eggs.

Clumps of the brownish seaweed, known as sargassum, have long washed up on Caribbean coastlines, but researchers say the algae has exploded in extent and frequency in recent years.

From the Dominican Republic in the north, to Barbados in the east, and Mexico’s Caribbean resorts to the west, officials are authorising emergency money to clear stinking mounds of seaweed that in some cases have piled up to nearly three metres (10 feet) high on beaches, choked scenic coves and cut off moored boats.

For the last few years Chinese fishermen and beachgoers have faced something similar: 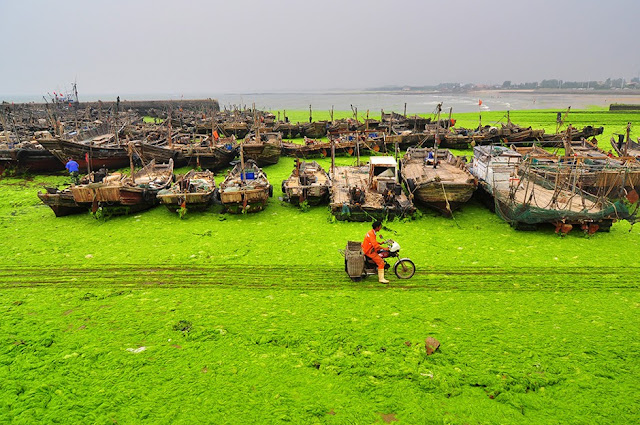 While out here, the Pacific Northwest is living with "The Blob" and an algae bloom stretching from northern California to northern British Columbia. 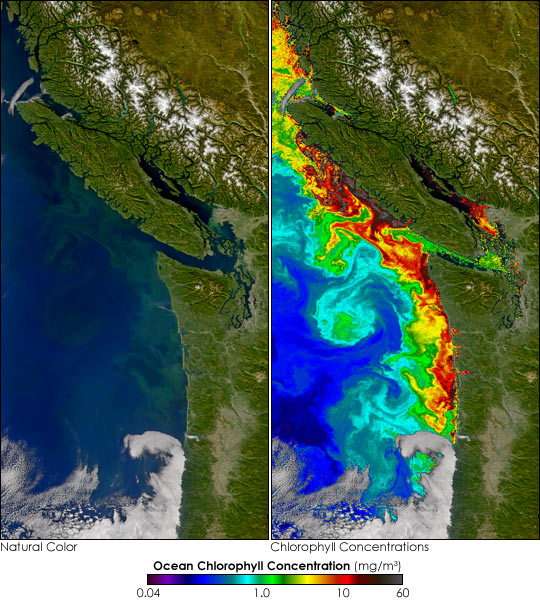 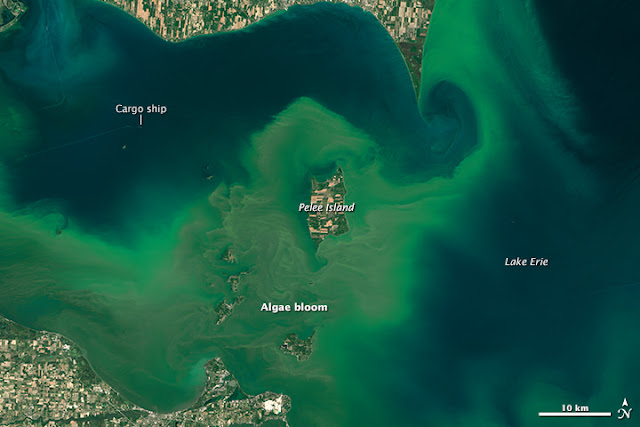 As a bloom spreads throughout the surface layer of lake water, the cyanobacteria release toxins known as microcystins into the environment. Simply swimming in water with high concentrations of microcystins can cause symptoms such as stomach cramps, vomiting, diarrhea, fever, headache, muscle and joint pain, and weakness, as well as skin and eye irritation, sore throat and allergic reactions. If these toxins enter the drinking water supply in sufficient amounts, such as during extreme outbreaks, symptoms can develop that cause liver and kidney damage, or life-threatening bouts of gastroenteritis, aka "stomach flu" (especially for children and the elderly).

Coupled with these toxins, further problems occur due to the life cycle of the cyanobacteria. Since individual bacteria only live for a very short time, even as the bloom spreads, millions of them die in the process. The death and decay of the bacteria strips oxygen from the water (hypoxia), and the dead organisms form a layer of scum on the surface. Thus, the living bacteria in the top layer of the water absorbs sunlight for photosynthesis while at the same time more sunlight is blocked from reaching deeper waters by this scum on the surface. This combination kills off important plant and microorganism species that live deeper down, and as well as any organisms that depend upon them, worsening the hypoxia in the lake water. Some regions of the lake can become "dead zones," with massive fish die-offs ("fish kills") that can make the situation worse.

What these events show is that the way we're living is compatible with actually living.  We're not only fertilizing our farm fields, we're also fertilizing the algae in our lakes and oceans. And, where our handiwork erupts, we're creating dead zones that kill off fish species and, left unchecked, create water acidification.

I don't know, isn't it time we tried something else?
Posted by The Mound of Sound at 10:02 AM

When I was a kid, I lived in a new development in the south end of Oshawa, Ontario, that was a few blocks north of the shoreline of Lake Ontario. One memory I have of the place was that in the summer months there would often be large algae blooms just off of the gravel beaches that were often so thick and unpleasant that swimming was impossible. These blooms were often accompanied by sizable fish kills due to the low oxygen content of the water, and inevitably due to wave action the whole nasty mess would be pushed up on to the beach to rot. To say that the stench of these thick mats - sometimes up to a foot deep - of rotting algae and fish was absolutely vile does that word injustice, and the smell could easily carry all the way up to our house, making going outdoors a chore instead of a nice aspect of summer. I don't know how the people whose homes were atop the bluffs just above those fouled beaches could ever stand it.

Some years later, when I was living in the south end of Oakville for a time, there was a particularly nasty algae bloom in the lake that fouled the beaches very badly. The smell alone had both me and my sister retching and dry heaving for a couple days.

I remember reading paleontologist Peter Ward's "Under A Green Sky" a couple of years ago and how he discussed the role that massive oceanic algae blooms during periods of global warming in the Earth's past led to increased toxicity and acidification of the ocean's which then led to cataclysmic feedback changes to the atmosphere itself. Maybe that's what we're starting to see again now.

Maybe our planet has had enough of us...

I have a copy of Ward's book, Neil, and it makes for grim reading. This is the seminal paragraph from it in which he describes how oceans go from generating oxygen to producing hydrogen sulfide:

"First, the world warms over short intervals of time because of a sudden increase of carbon dioxide and methane... The warmer world affects the ocean circulation systems and disrupts the position of the conveyer currents. Bottom waters begin to have warm, low-oxygen water dumped into them. Warming continues, and the decrease of equator-to-pole temperature differences reduces ocean winds and surface currents to a near standstill. Mixing of oxygenated surface waters with the deeper, and volumetrically increasing, low-oxygen bottom waters decreases, causing ever-shallower water to change from oxygenated to anoxic. Finally, the bottom water is at depths were light can penetrate, the combination of low oxygen and light allows green sulfur bacteria to expand in numbers and fill the low-oxygen shallows. They live amid other bacteria that produce toxic amounts of hydrogen sulfide, and the flux of this gas into the atmosphere is as much as 2,000 times what it is today. The gas rises into the high atmosphere, where it breaks down the ozone layer, and the subsequent increase in ultraviolet radi8ation from the sun kills much of the photosynthetic green plant phytoplankton. On its way up into the sky, the hydrogen sulfide also kills some plant and animal life, and the combination of high heat and hydrogen sulfide creates a mass extinction on land. These are the greenhouse extinctions."

Chris Hedges and people like him have it down. Many of us know it and where all this havoc is going and where it is arriving and what it is doing. All good and down. Now what?