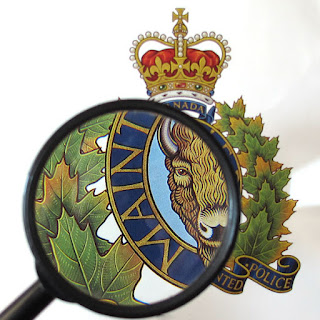 There's a critical aspect to the Duffy trial that we're not going to get out of Harper's PMO staff or his "loyal unto death" shills in the Senate or the Conservative Party executive.

It's an aspect that goes to what appears to be a political prosecution that, it could be argued, calls justice into disrepute thereby violating Duffy's Charter rights.

It goes from then corporal, now sergeant Horton, the investigating officer straight up to the commissioner, Hank Paulson.  Did they "fix" the investigation of the Wright-Duffy scandal in the only way possible to nail Duffy and take everyone else off the hook?  Was this a setup by the state police apparatus?  Has the national police service become just another partisan political agency doing the bidding of Shifty Steve Harper?

I haven't found anyone who gets the concept of Precium Immaculata, the Immaculate Bribe, in which the person who transmitted the proceeds of a crime, the bribe, is cleared of any offence, leaving only the person to whom those proceeds of crime were transmitted to take the rap.  No one, nobody understands that.

Nobody understood that at the time it was announced Wright would face no charges and now that we've peered inside, through the masses of emails, this thing reeks of a set up.

We need to know just what sergeant Horton did as he amassed witness statements and processed the email dump.  What role did Paulson and his boss, Vic Toews, play in shaping the investigation? Who saw the evidence? Was the prime minister let in on everything? How many times did he meet with Paulson immediately before Duffy was charged and in the months afterward? Was Shifty ever treated as a possible suspect?

There's a very bad smell to this and a lot of questions that need answers.  Call sergeant Horton to the stand.

Testament to the Snowcrash.
In Canada we always believed the fix was not in.

.. currently.. Canada is the country where some 240 or so federal ridings experienced Election Fraud via Live and Robo Calling, Vote Suppression, Vote Moving related to Bingo Card updates during the actual voting period and mysterious voters accepted by scrutineers and trNslators who were never identified or found .... ...

The hapless Michael Sono was charged and convicted... the CPC voter database which was used country wide in the Election Fraud, had its logs of those who accessed via Admin Priviledge tampered with and altered...

Do we really think a Harper Government that smugly sat on its hands for such violation and outrage.. essentially dooming any effective investigation, is not capable of stage managing via the RCMP, how effective one constable's investigation would turn out? We are now witnessing treachery at the highest levels of the Harper Government, completed deceit, coverup, denial, bribery, obstruction.. and all as the most senior Harper Ministers peel away from politics, scandal and incompetance..

It now stands revealed that PM Harper has tried to gain complete control of The Senate, supposedly a completely independant body of the overall Government, as is The Supreme Court. Duffy was a blip, a mere detail.. owning over 4,000.00 worth of PEI real estate was all Harper needed to know.

What of Ms Pamela Wallin ? What has our creep PM arranged to look after or bury her little details.. ?

Lots of former Harper enablers want their reputations back, if possible... or if not already ruined, want to protect them ....
meanwhile Harper is desperately trying to salvage his.. at the expense of theirs...
The Great Harper Legacy ?? It will be him whining.. 'I am not a Creep' .....

Hence why I haven't believed in "justice" or "truth" or even the thin veneer of "law" in Canada for over a decade...

If I might offer an altnerative, Im not a lawyer or a cop, take:

Charging Duffy is a strategic move. It's silly to think the RCMP and Crown wouldn't have suspected a link to the PM and a conspiracy as it's obvious from the `'good to go' email and other things that it weren't just Duffy and Wright. And it might be a stretch to think they are so corrupt they'd let the PM walk. But to finger the PM in a criminal investigation too soon might well backfire. A case, or the incentive to charge a man who can change the legislation underwhich you'd lay charges to save himself, would have to be overwhelming and compelling. So, build the case against Duffy and prosecute him, because it's easy and avoids directly confronting where you think the real conspiracy is, and allows the conspirators to relax. Have your contradictory witnesses (Perrin, Wright) testify and see the story emerge public light, stripping away any credibility on the part of the government's account of events, so that it becomes much less risky and more compelling to investigate and prosecute them, and increases the likelihood that Wright, Duffy, Novak,and anyone else will turn on each other. It makes sense if the police/Crown treat the Party like a gang premised on extreme loyalties. Right now, Perrin is the only one telling a very different account of events, but the pressure Wright, Novak, and Harper must be feeling now will be massive, and any communications they have could well end up in court, so that none can be too sure of whether the other will keep their stories straight, and the loyalty ediface begins to crack. You get the picture.

@ Boris - that's a pretty elaborate scenario you've raised. I wonder where this scandal will go if we have a change of government? My guess is that the new guy would do much the same as Obama did in choosing not to prosecute his war criminal predecessors. Let bygones be bygones.

@ Anon 5:06 - The scandalous conduct of the RCMP since Zaccardelli's days has gutted the once considerable respect I had for them.

@ Sal - as I've mentioned a day or two ago, given his near complete lack of notable achievements, Duffy-Wright could be Harper's legacy if he's turfed. But, what if he somehow clings to power? How much respect do the Canadian people have left for him and how can he govern without some foundation of legitimacy?

@ Steve - you and many of us have lost faith that our government will do the right thing, that the fix won't always be in. We'll have to wait and see if Harper has shifted Canada into a new, ethically ambiguous paradigm.