The Point of No Return? 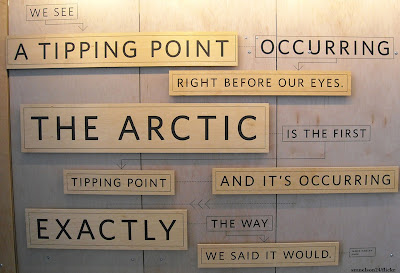 A friend sent me a link to a Rolling Stone article, "The Point of No Return: Climate Change Nightmares are Already Here." It's a relatively complete and accurate synopsis of the state of our climate-changed world today.  Fair warning - it's a dismal read that you may find upsetting before you sit down to Sunday dinner (if you still do that sort of thing).  Here's my follow up:


For the first time people in their 30s and younger have to contemplate the possibility that their lives will end not by mishap or natural cause but out of the chaos of climate change.


Some, such as climate scientist and professor, Guy McPherson, who maintains the blog “Nature Bats Last,” have already thrown in the towel. Articles are now appearing about how the main occupational hazard of client science types has become severe depression.

Even in Canada the political response is to talk about vague, “political” targets for reducing emissions by a certain percentage by a certain date in hopes of staying within another “political” number, the 2C target – neither of which is anchored in science.  In the result we’re staying behind the problem, never daring to actually get in front of it even though that’s the only place where we can hope to achieve any effective result.

Because we don't know where the point of no return is (if we haven't already crossed it), the only avenue for effective action on climate change requires that we get ahead of the challenge and do everything necessary to stay there.  Nothing short of that will work. The current approach will buy as bit of extra time but nothing more.

Our leadership can’t think beyond the notional emissions reduction scenarios. They see this in the context of atmospherics. The equally existential challenge of ocean acidification isn’t even on their horizon.

The most lethal mistake they’re making is to take climate change in isolation, de-linking it from the companion threats of over-population and over-consumption.

At my birth the world’s population stood at the entirely sustainable 2.5 to 2.8-billion level.  Now, in just one lifetime, we’re nearing 7.5-billion and heading to 9 by 2050 or earlier. At my birth society, from the developed world to the Third World, had far lower per-capita consumption.  Today there are ever more mouths to feed and they are likewise growing ever more voracious in their consumption of resources far beyond our planet’s carrying capacity.  Just a decade ago World Overshoot Day fell in mid-October.  This year it arrived on August 13.

Natural feedback loops evidence tipping points already crossed.  Dr. McPherson, as of last month, has catalogued about 60 of them so far. He concludes that we’ve woken the sleeping giant, nature, and from here on in, our feeble efforts to reduce future emissions are a hollow gesture. I hope he’s not right but I don’t see where he’s wrong.

We debate the rate of climate change onset and the severity of its impacts but rarely in the context of our global civilization’s resilience to endure or even survive them. We’re doing next to nothing on adaptation. While Calgary was flooded, much of the city underwater, an annual symposium of an engineering group dealing with natural disasters was held in Toronto (which had itself been flooded weeks earlier).  One of the leading experts, a professor emeritus from McGill, suggested Canada is in dire need of new and reinforced infrastructure that he estimated would cost upwards of a trillion dollars.  Instead our federal government is budgeting a meaningless $50-million a year which doesn’t keep up to the ongoing decay.


The simple fact is we’re not resilient.  To the contrary, the rise of today’s global civilization over the past 30-years has been built on defying the need for resilience, rejecting posterity. Ours has become a world of maximized production/maximized consumption in which the guiding philosophy has become “I can so I will” and rejects any notion of whether we “should.”  We institutionalize people who think that way - some are criminals, some are lunatics. Some we elect to Parliament.

In March, the UN Food and Agriculture Organization (FAO), released a study that found most of the planet’s arable farmland will be gone in just 60-years, the victim of the intensive, industrial agriculture we practice in order to feed today’s 7+ billion people.  I had read about this in an online course I’d taken on global food supply a month or two earlier. Even good farmland, as in Europe and North America, is already somewhat degraded and the use of chemical fertilizers, pesticides and herbicides is stripping the soil ever faster.

Sure, food production is at record levels but that's obscuring the important part. We're producing this volume of food through intensive agriculture and chemical conjuring tricks associated with industrial agriculture that are depleting the very soil growing this bounty.  And we're utterly dependent on that. It's not like we can quit and let nature recover. That's not an option until we're prepared to allow an enormous percentage of our global population simply die (with the proviso that we'll somehow manage to survive the world war(s) that this triggers).

I have no doubt that this is going to be on us far sooner than we imagined and we’re facing a fairly sudden collapse. Our societies, that collectively constitute our global civilization, are already astonishingly unbalanced and it won’t take much to tip us over.  When Iran records a “wet bulb” temperature of 74C and the dry temp in Baghdad hits 53C where do you imagine this is going. And, of course, this year we’re in store for a super El Nino which causes global temperatures to spike even higher. These are impacts that can destabilize countries, exacerbate old tensions - ethnic, social, religious - triggering unrest and conflict.  The devastating war in Syria arose out of the impacts of severe drought.

Several years ago it was found that, as we eject ourselves from the Holocene and get sucked into the Anthropocene, we would embark on a temperature regime in which every year would be hotter than the hottest year experienced in the previous 150-years. Every year. It's predicted to begin around 2020, first in the Caribbean, and overtaking every other nation by 2047. That may have already begun.  That will, of course, result in a super-heated atmosphere which, with ever greater surface evaporation and transpiration, will sharply increase atmospheric water vapour, the most powerful greenhouse gas of them all and usher in a new paradigm of severe storm events of increasing frequency, intensity and duration.  And yet we are and apparently intend to remain mortally dependent on infrastructure that is aged, rapidly deteriorating and, in any event, designed to meet the needs of a climatic age that’s long gone.

It would be nice to believe that we're finally playing catch up but we're not. We haven't even identified where we have to be and by when in order to catch up and, without that, the idea of ever getting ahead of these challenges before we get overtaken by devastating events is a grand and dangerous delusion.
Posted by The Mound of Sound at 3:06 PM