The Sparks Will Fly on Wednesday 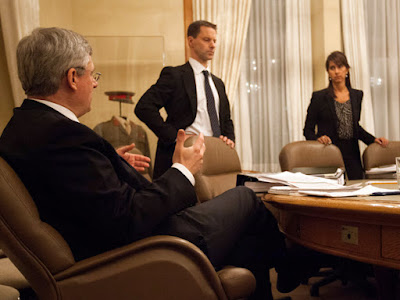 Nigel Wright steps into the witness box to re-open the Duffy trial on Wednesday. It's hard to see that there's much middle ground available to Wright. He will either exonerate Stephen Harper, corroborating Harper's claim that he knew nothing about the $90,000 deal, or he'll sink Harper - at least if he tells the truth, the whole truth and nothing but...

The Crown's examination in chief of its star witness probably won't be very exciting. If there are any sparks they'll probably await Wright's cross-examination by Duffy's defence counsel, Don Bayne.

Wright's evidence goes to the main charge faced by Duffy, accepting a bribe. The bribe was the 90-grand and the person giving that bribe was Nigel Wright who, through some twist of investigatorial and prosecutorial logic is not deemed to have been a culpable party to the bribe. It's a theory that brings the crime more in line with extortion than bribery.

My take on it is that the Crown considers Wright blameless because there was nothing received by Wright in exchange for the cheque.  However, if Wright was merely acting as a very generous agent for the party and his prime minister, then the benefit received from that bribe by others should also be attributed to Wright.

There was consideration for the bribe in the terms attached to the money delivered to Duffy's lawyer.  The money was peanuts although perhaps not to Duffy. Yet it was minuscule in the context of the political damage it was intended to avert. The terms are laid out in Duffy's email to his confidantes that somehow managed to find its way into CTV reporter Bob Fife's hands.

There's the bribe and whoever imposed those terms committed bribery, right Nigel?  Getting senators Tkachuk and Stewart-Olsen to launder the Senate audit report was part of that bribe.  Take the money, pay it to this party, and I promise you I will corrupt senior members of the Senate in the exercise of their duties. You can't expect to do that and be found blameless. Not even Nigel Wright, not even Stephen Harper.

Here's the thing to remember. Duffy's email was sent when the deal was made. It is contemporaneous with the facts and events. What it described actually transpired, every element of it. It wasn't made up after the fact. There was no element of trying to shift blame from Duffy onto someone else. There was no finger pointing. It was a simple narration of a deal that came to pass just as outlined.

The PMO gang didn't believe Duffy would shoot his mouth off.  Duffy didn't think any of his confidantes would leak the email to Bob Fife.  If any of them had the slightest inkling the deal might be leaked there would have been no deal, Wright would not have written the cheque, Perrin would not have drafted the lawyer's letter that transmitted the cheque to Duffy's solicitor. They would not have left their fingerprints all over this.

Harper seems to think he'll get off scot free, Mound. Is he delusional?

My hunch is that a leak is not coming directly from "any of his confidantes." Some other forces are behind it...
A..non

I agree with all of your analysis Mound, but I still think Wright will say Harper was not involved. There is something fishy about Wright not being charged. It would take courage and integrity to show that a sitting PM knew about the 90k cheque and lied about it. I don't think Wright has either.

I'm leaning toward Pamela on this one. I think Wright is willing to take one for the Gipper in exchange for some future perks.

Bayne will ask " Did you give Duffy a bribe ?" If Wright says yes , he admits he offered a bribe and could be charged. If he says no Duffy is innocent of the charge.

"Verily, I say unto you my brothers and sisters, if thou must lie in a Canadian court to protect my dear brother Stephen, then that is what one must do. Amen."

Harper would have shut the court case down ages ago if he thought it would harm him.
The bas###d will control the courts for years to come.

.. leaving Ray Novak out of the conversation is a mistake... or Arthur Hamilton or Jenni Byrne. We truly do not know to what astounding extent, Ray Novak can and will speak for Harper or act as a firwall for Harper. To not establish, under oath what very specific role any of these other people had in a coverup, obstruction, dishonesty.. would be sheer incompetance and a failure of justice in my view

I think Rumley is right. Bayne's job is to get Duffy acquitted of the bribery charge, not skewer Harper. If Wright leaves that path open Bayne would probably take it even if it lets Harper off the hook. Of course we're all flying blind on this one. Only the players know what's going on behind the scenes.

It was Mr. Wright who hand picked Harper to lead Cons...
A..non

It is all the same, old same old. Harper will get off free as a bird. Just as all who have gone before have including Sir John A. What? What? The Canadian System is rigged just to enable the splitting of hair. You can forget law.