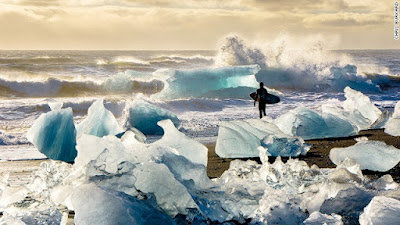 Arctic expert, professor Peter Wadhams, doesn't think much of the Intergovernmental Panel on Climate Change. In fact, the Cambridge professor of ocean physics and head of the university's Polar Oceans Physics Group, denounces the IPCC as a dangerous sellout.

He highlighted that the IPCC has failed to quantify and properly assess the risk of a methane outbreak from melting permafrost and undersea methane hydrates.

"Because that is scarcely mentioned by the IPCC in it's assessment because I think it is being criminally complacent in not wanting to stress or talk about the possibility of some major catastrophes.

"They were once a body that warned the world about climate change, but now they are a body that is trying to say 'Well, it's bad, but not that bad. Just reduce your carbon emssions and everything will be okay.' But it won't. These things have come along, there is enormous evidence that this is happening, and we should be really worried about it."

"Instead of getting less than a metre of sea level rise this century, which is what is predicted by the IPCC, the Intergovernmental Panel on Climate Change, the accelerated melt of the Greenland ice sheet could give us a couple of metres or more this century.

"In fact some glaciologists are talking about four or five metres. That might be extreme, but it is very likely to be more sea level rise than so far has been predicted. That means we have been very complacent about sea level rise and we ought to be realizing that many coastal regions, for instance the coast of Bangladesh which is very vulnerable, Eastern China, and a lot of cities like Miami, will have to be abandoned and that will have an enormous impact on the global economy and the lives of people."

He then adds that the reduction in sea-ice will cause the albedo of the Arctic to reduce, absorbing more warmth and further accelerating global warming. "This attempt to pretend that we can keep global warming below 2 degrees, which was already a pretence, is even more ridiculous. It is certainly going to get to 4 or 5 degrees by the end of this century, which will then have quite catastrophic impacts on agricultural production, for instance, and being able to support the population we have now, let alone an increase in population."

"To slow the release of methane and prevent a methane bomb we need to bring back Arctic sea-ice, and to do that we need to cool the planet."

Australian climate scientist Andrew Glikson has also written at The Conversation on Methane and the risk of runaway global warming. But other scientists have also indicated the strong risks of Arctic Methane Feedback amplifying warming

Wadhams also denounced the complacency of the world's political leadership.

"There is a conspiracy of complacency throughout the world in which they [politicians] still imagine that if we do a few minor things, a few minor adjustments and reduce our carbon emissions then all will be well. But it won't. Because we have already got too much carbon dioxide in the atmosphere. We are already going to have more than 2 degrees warming even if we don't emit anymore because of the existing carbon dioxide in the atmosphere." said Wadhams.

"We have to not only stop emitting [CO2] or reduce our emissions, but find ways to take it out of the atmosphere. That is a technology that hasn't been developed. It would be a massive research program to develop, but we should be doing it. A bit like the Manhattan Project. We should be doing it from the point of view of our own survival. That is the sort of thing the present generation should be concentrating all our attention on.

"If we can do that, then all our children have got a future."

"When you put together all the changes that are going on you see how they are ramping up to become a major change. As they go on, they tend to accelerate. Everything is increasing exponentially.

"My fear is that no-one will do anything because of cowardice and inertia and all the normal human attributes. They say 'Well let's wait until it hits us and then we'll act', but by the time it really hits us, by the time weather changes have made it impossible to feed everybody in the world, for instance, and we have worldwide famine, those sort of changes at that scale have happened then it's too late to do anything. We will by then have too much carbon dioxide in the atmosphere to prevent a runaway global climate catastrophe. My fear is that our own inertia will lead us to not take action until it is actually too late to save ourselves."

I so wish Wadhams was just some wild-eyed radical on a rant - only he's not.  In fact he's just another voice in the choir of Arctic experts who have been trying in vain to warn us of what is happening in the far north and what that holds in store for our children and theirs. Their research, their analyses and their warnings are simply falling on deaf ears.  Everything is flushed down the memory hole.

A lot of the science types believe it quite likely we're heading for between 4C and 6C of warming by the end of this century.  In April I took an online course presented by top experts, including Schellnhuber, from the Potsdam Institute examining what awaited mankind and all other life on Earth should we allow the planet to warm by 4C. It's the sort of information we wouldn't dare teach even at a highschool level.

Our politicians haven't got the guts to address it, to even hint at it, and neither do we. They know it's a Pandora's Box. Once opened they would stand exposed, incapable of justifying their complacency, borderline perfidy.

By the way, Wadhams believes the only hope left requires geo-engineering to cool the planet and restore the Arctic sea ice and polar atmosphere.

Update:  Meanwhile, the very sort of politician Wadham denounces, in this case the NDP's Tommy Angry Beard, has pulled a rabbit out of his ass to declare that Canada can expand Tar Sands production, just in a "sustainable" way.