As If Any Canadian Needs a Good Reason to Turf Harper 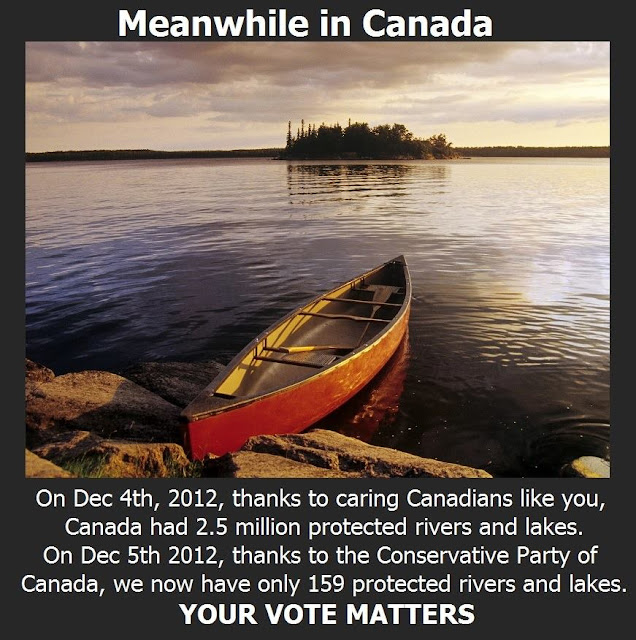 For most of Canada's history (at least that part I have lived through) we have had reasonably benevolent governments. I suspect that most Canadians still don't (can't?) believe that we have a Prime Minister who is openly hostile to Canada, it's people (us) and it's environment.

There's a genuine malevolence to the guy, Toby. He has a very deviant sense of his responsibility to the country and almost acts as if he was holding Canada and our people hostage.

Above all else it was the "it can't happen here" mentality that Harper exploited so well. I remember all the smugness back when GWB became President in this country about how such could never happen here, and I felt chills down my spine at the time. I over the next several years as I saw the increasing rise to power of Harper tried desperately to get people to understand that this was someone fundamentally hostile not just to progressive values (which he clearly is, far more than any Lib was) but core centrist values and concepts that the vast majority of this nation supported and relied upon. That this was a true scorched earth destroyer unlike anything we had ever seen. What I got back was this was Canada, that sort of thing can't happen here, and even if it did we are so well protected by our government structures we can survive a bout of it. What scares me is how many people after this last decade are STILL having trouble wrapping their heads around this so basic and obvious truth about Harper, and that scares me a lot going into this election campaign.

Not hostage, worse, active torturing, raping, and murdering comes closer than anything as relatively clean as hostage taking on its own, and I am using these extremely harsh descriptors with careful thought, and not as mere rhetorical flourish. He HAS no sense of real responsibility so far as I can see, deviant or other, just a need to lash out at those he feels wronged him and the near completely nihilistic drive of making sure everyone goes down as his revenge even if it in the end includes his own destruction, so long as he is able to achieve his ends first he doesn't really care. I tried to warn people when it could have made a difference, it is why I have such blowtorch rage at the Dipper leadership as you have heard me describe in massive detail time and again, and why I could have shot every Liberal that thought Ignatief was someone they ever should have brought back to Canada to run within their party let alone be seen as an acceptable choice for leader. I agree that the damage Ignatief did was extreme, I would suggest even more so than the Sponsorship scandal did, between what he was doing behind the scenes to gain the leadership and then what he did and didn't do once he got it.

We as Canadians tend to want to believe in the best of people and not the worst, and we do not want to believe we could ever have allowed such a monster to become our PM. We want to believe that such descriptions have to be overblown heated rhetoric instead of harsh yet accurate descriptions of the reality. I'm hoping and praying that this time enough voting Canadians have finally come to understand the horrific truth about what Harper is and why he and his party must not merely be removed from power but defeated as harshly as possible to send the message about how this is NOT acceptable political behaviour in this nation whatever your ideological/political affiliation. One of the most disturbing aspects of the last decade for me is watching the NDP appearing to learn the worst lessons from Harper in how to take an ideologically cored party from being unelectable to government, and that has me very disturbed indeed, but that is another comment altogether.