C'mon Christie, Give Us a Break.

Christie Blatchford doesn't like covering the Mike Duffy trial. She finds it a burden. To Christie, Duffy's defence counsel, Donald Bayne, is wasting everyone's time, or at least hers, demolishing the Harper PMO's narrative which forms the foundation for the most serious charges faced by Bayne's client.

She doesn't think what Shifty's Bad Boys did has any bearing on Duffy's guilt or innocence. Why is there any need for a defence at all?

Tedious as Blatchford is determined to be, if she's going to be doing video clips could she not just up her game - just a bit? All she would have to do is ditch the ricebowl haircut and those trailer park serial killer glasses. Nobody should go around making themselves look that grotesque. 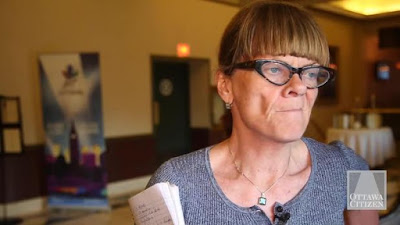 And, for Christ's sake, stop the perma-scowl.
Posted by The Mound of Sound at 12:53 PM

Just avoid the stupid bitch. I've successfully done that completely for years. Till just now when I opened your blog. Thanks a lot.

Sorry, Dana. I didn't mean to ruin your weekend.

Sometimes what a person looks like on the outside is what they are on the inside. With Blatchford I wouln't change a thing.

I think I understand her. Duffy is guilty because she doesn't like him. Charged with buying a dog in Peterboro. The seller says he didn't. Doesn't matter to the Queen; sentence first trial later. Off with his head.

Mound, Harper has some interesting supporters including Christie Blatchford.

Thinnkingaboot the National Post and Dismal profits and journalism.

I'm disappointed with this commentary. You are usually remarkably insightful. Why pick on her appearance? Surely that's not the issue. From what you say (I never read/watch the woman) the issue is her failure to reflect before commenting, her lack of critical thinking, her defence, if only by omission, of the indefensible. Can't we stick to that and leave the cheap shots to the other side?

Anyong said....is it necessary to call women who are out of the box "bitches". Granted she is unusual. There are many men in the same boat, do we call them "fxcks"

Appearance is fair game these days. We mock Harper for his helmet head. Tories mock Trudeau for his locks. Fat Tories like del Mastro are prodded relentlessly as is the bald troll, the Cavendish Cottager. We even diss Mulcair for his beard.

So I'm not much troubled about Christie and her "perma-snarl." She cultivates her grotesqueness. There are some amazing pictures of her from her earlier years. She was quite stunning.

I do agree with Anyong. The "bitch" reference is unnecessary. Anyone who reads Blatchford's articles can come to that conclusion all on their own.