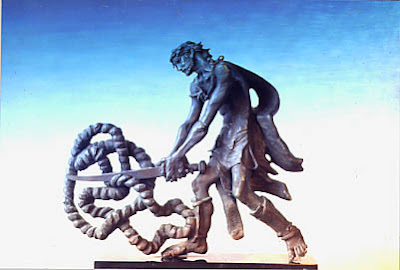 Earlier this week Der Spiegel published an interview with Mikhail Gorbachev in which the former Soviet/Russian leader reflected quite eloquently on the perilous state of nuclear weaponry in the 21st century.  Sooner or later, in Gorbie's opinion, they will be used just as surely as the spread of them will be almost impossible to check.

The problem, as he sees it, isn't with Iran or any of the other countries toying with getting nukes.  In Gorbachev's view, the Gordion Knot of nuclear proliferation lies straight at the top.

It is the correct goal in any case. Nuclear weapons are unacceptable. The fact that they can wipe out the entirety of civilization makes them particularly inhumane. Weapons like this have never existed before in history and they cannot be allowed to exist. If we do not get rid of them, sooner or later they will be used.

That's why we should not forget that the elimination of nuclear weapons is the obligation of every country that signed the Non-Proliferation Treaty. Though America and Russia have by far the largest arsenals at their disposal.

Gorbachev warns against being lulled into complacency by the notion of "mutually assured destruction," (MAD) being a safeguard against any nuclear power actually using them.

There's a dangerous logic in that. Here's another question: If five or 10 countries are allowed to have nuclear weapons, then why can't 20 or 30? Today, a few dozen countries have the technical prerequisites to build nuclear weapons. The alternative is clear: Either we move toward a nuclear-free world or we have to accept that nuclear weapons will continue to spread, step by step, across the globe. And can we really imagine a world without nuclear weapons if a single country amasses so many conventional weapons that its military budget nearly tops that of all other countries combined? This country would enjoy total military supremacy if nuclear weapons were abolished.

[American militarism] is an insurmountable obstacle on the road to a nuclear-free world. That's why we have to put demilitarization back on the agenda of international politics. This includes a reduction of military budgets, a moratorium on the development of new types of weapons and a prohibition on militarizing space. Otherwise, talks toward a nuclear-free world will be little more than empty words. The world would then become less safe, more unstable and unpredictable. Everyone will lose, including those now seeking to dominate the world.

We have reached a crossroads in relations between America and Russia. Many are already talking about a new Cold War. Talks between both powers over important global problems have practically been put on ice. That includes the question of nuclear disarmament. Trust, the very capital we worked so hard to build, has been destroyed.

...I'm very worried. The current state of things is scary. The nuclear powers still have thousands of nuclear warheads. Nuclear weapons are still stationed in Europe. The pace of reducing stockpiles has slowed considerably. We are witnessing the beginning of a new arms race. The militarization of space is a real danger. The danger of nuclear proliferation is greater than ever before. The Comprehensive Test Ban Treaty has not entered into force, primarily because the Americans did not ratify it. This would have been extremely important.

...No matter how difficult the situation is, we must not fall into resignation or panic. In the mid-1980s, there was no shortage of people who thought the train to atomic hell was unstoppable. But then we achieved a lot in very short space of time. Thousands of nuclear warheads were destroyed and several types of nuclear weapons, such as intermediate-range missiles, were disposed of. We can be proud of that. We accomplished all that together. It should be a lesson for today's leaders: for Obama, Putin and Merkel.

Mr. Gorbachev's remarks tie in rather neatly with the observations of Andrew Bacevich in "The New American Militarism."  There, the former US Army unit commander turned professor, explored how precision guidance had so increased the effectiveness and reach of conventional weapons that it had undermined the military utility of nuclear weapons with their overkill and hard to control, unintended and undesired knock-on consequences.  In other words, the role of nuclear warheads for offensive purposes was over and their sole remaining value was as a deterrent against attack.  They're now defensive weapons. Weak countries that feel vulnerable to attack from their neighbours (yes, Iran) want them to deter aggression. That's the compelling reason to get them but, after that, you may wind up with lunatics at the button.
Posted by The Mound of Sound at 12:37 PM

Don't know if you saw the documentary on TVO the other night. It was called the "Man who saved the world". It was in 1983 and Russian detectors showed that 3 nuclear missile had been released and were heading for Russia. The russian in charge had to either retaliate or guess at it being a false alarm. He chose the latter. When radar did not detect the weapons, then they knew it was a false alarm. The whole decision about what to do fell on this mans shoulders. He chose correctly, but you realize watching the film how easily it could have gone the other way, especially today with so many inept, psychopaths in charge. People are asleep.
Gorbachov is right.

Pamela, look up Broken Arrows. You will find sites like this:

This is only a partial list. I know there was one north of Hazelton, BC in the 1950s.

Hi, Pamela - no, I didn't see it but I'm familiar with the event. That Russian didn't really have a choice. He was under orders to launch a retaliatory strike. That made him even more courageous to have disobeyed orders to basically save the world.

There was a time when both sides had short and intermediate range nuclear missiles in Europe. That created a predicament in which there was virtually no time for human analysis and decision-making. Some systems were developed to cut the human out of the loop entirely and simply launch autonomously on detection.

It took a while for both sides to come to their senses and realize this was an inevitable path to completely accidental,all out nuclear war. It sounds crazy. It was.