The Unist'ot'en People of Northern B.C. versus Chevron. Which Side is the RCMP Backing? 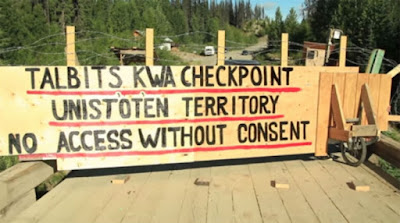 Band leaders of the Unist'ot'en of northwest British Columbia are bracing for mass arrests in their ongoing fight against the fossil fuelers, Chevron in particular. The RCMP aren't exactly denying the allegation, either.

"We understand that there has been some discussions on social media that don't accurately reflect the RCMP's action or the situation," she told Vancouver Observer in an email statement. "To date, there has been no police action. It is our understanding that discussions between industry and the Wet'suwet'en are still possible."

Just what does that mean? So long as the FNs are talking with "industry" they won't be jammed up? If they remain defiant of Chevron they'll be heading for the Greybar Hotel by the busload?

More than 50 individuals and organizations including Elizabeth May, David Suzuki, and Greenpeace Canada, signed an online declaration of support for the clan, which has claimed and governed the territory through its traditional and hereditary laws.

"We are deeply and gravely concerned to learn from a variety of sources that the RCMP appear to be on the verge of executing a highly provocative and dangerously reckless operational plan to make arrests," said the document. "We are local, national and international organizations monitoring these developments closely and we affirm that the Unist’ot’en are not alone."

The BC Civil Liberties Association (BCCLA) also sent a letter to the RCMP urging them to scrap any plans to cross into Unist'ot'en territory and make arrests.

"... Police must proceed with the utmost caution in a situation such as this, so as not to interfere with the constitutional rights of the Indigenous people," wrote BCCLA executive director Josh Paterson. "If the RCMP is, as reported, planning to move in on the camp and remove its members against their will, we urge that this plan be reconsidered."

Meanwhile, at the blockades, they're bracing for Canada's Petro-Police Force, formerly known as the RCMP, to move in.

Unist'ot'en checkpoints have been set up on two entrances to its territory on Moricewest Forest Service Road and Chisolm Road. The Indigenous group has allowed loggers, tree-planters, and hunters to pass through peacefully, but has used the barriers to keep oil and gas officials at bay.

The camp has not and never will approve pipeline construction on its land, said Huson, despite more than 10 proposalsinvolving its ancestral land. Among the most controversial pipeline projects that would affect the Unist'ot'en are Enbridge Northern Gateway and Chevron's Pacific Trail Pipeline.

Wouldn't it be cool if the way the cops worked was to go round up and jail Chevron executives when they were threatening to violate First Nations territorial rights?

Yes it would be cool indeed. However that is not a common occurrence in petro-states. Sigh.

Ron Ignace: "Any arrest under Bill C 51 creates political prisoners of First Nations!"
I agree. The RCMP are gathering in Burns Lake. First Nations are gathering at the camp. This is a burgeoning tinderbox.
Harper does not understand. We First Nations remain culturally distinct within Canada. He must believe, or at least pays lip service, to the racist belief First Nations no longer culturally exist, that we're red on the outside, but white inside.
Nothing could be further from the truth. We may have lost most of our prior history to the residential schools, but we still remain apart from Canada. We still stand aside from Canada.

From what I've read, Troy, First Nations have a lot of just ordinary Canadians on their side in this. A lot of us know who is carrying this fight, our fight, and it isn't us on the frontline.