Truth from the Sea 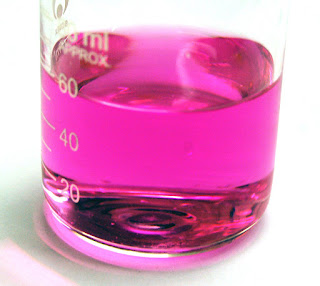 If there's one thing climate change deniers steer well clear of, it's the state of our oceans.

They confine their lies to cherry-picked data about global warming of the atmosphere, a narrative that still has to be bolstered with mighty lies oft repeated, but they know not to mess with oceanic reality.

None of us gets out of school without being taught that our oceans cover 70% of Earth's surface. Terrestrial life has to make do with the 30% of terra firma left over. Yeah, okay, fair enough.

Water doesn't lie and it really doesn't provide much cover for liars either.  It's an awfully good measure for we know what it is today and, from frozen ice cores, we know what it was two and three centuries ago and what it was millions of years ago when water became ice embedding with it all sorts of information including its age and even what was going on in the atmosphere the last time it was liquid. My, my, my.

We know from highschool chemistry class how litmus paper works.  We experimented with how it reacts to changes in pH.  You gotta love that phenolphtalein, don'cha?  It makes it easy to compare this sample of water from today to another sample from two centuries ago to yet another sample that's a million years old. And when you do that you find the clear fingerprints of anthropogenic global warming, man-made climate change in the industrial era.

It's too bad we don't reflect more on Earth's water when we discuss climate change because that powerfully impacts the narrative.

The world's oceans have already become about 30 per cent more acidic since pre-industrial times as seas absorb about one quarter or more of the excess carbon dioxide, triggering a chemical reaction. Combined with heat stress caused by warming waters, the rising acidity levels are already affecting complex ecosystems from plankton to shellfish and corals.

Researchers at Germany's Potsdam Institute for Climate Impact Research examined the prospects for massive geo-engineering efforts to remove CO₂ from the atmosphere and say it would take centuries for the oceans to become less acidic.

Assuming carbon dioxide removal could be ramped up to 90 gigatonnes a year – or about twice current annual emissions – oceans would not be brought back to pre-1750 levels until at least 2700, the researchers said in a paper published this week in Nature Climate Change journal.

"Geo-engineering measures are currently being debated as a kind of last resort to avoid dangerous climate change – either in the case that policymakers find no agreement to cut CO₂ emissions, or to delay the transformation of our energy systems," Sabine Mathesius, a Potsdam Institute researcher, said in a statement.

"[I]n a business-as-usual scenario of unabated emissions, even if the CO₂ in the atmosphere would later on be reduced to the pre-industrial concentration, the acidity in the oceans could still be more than four times higher than the pre-industrial level," Ms Mathesius said. "It would take many centuries to get back into balance with the atmosphere."

Pete Strutton, an associate professor at the Institute for Marine and Antarctic Studies at the University of Tasmania, said the paper showed "what we should already realise".

"What's needed is aggressive efforts to reduce emissions now, rather than aggressive programs in 50 years' time to remove it," Professor Strutton said.

Hans Joachim Schellnhuber, a co-author of the paper and also the senior scientific adviser to Pope Francis for his recent climate encyclical, said "the chemical echo of this century's CO₂ pollution will reverberate for thousands of years".

"If we do not implement emissions reductions measures in line with the 2 degrees Celsius target in time, we will not be able to preserve ocean life as we know it," Professor Schellnhuber said.

Sounds pretty ominous, doesn't it?  That's because it f__king well is! Forget the atmosphere.  Forget the droughts and floods. Forget the severe storm events of ever increasing frequency, intensity and duration. Put that all aside for a minute and think of oceans that are going to become four times more acidic than pre-industrial levels and, even with Herculean efforts to remove atmospheric carbon dioxide, still won't be back to normal until 2700.

Think of that and then ask yourself how hard it is for your political leader of choice to keep a straight face and promise he'll introduce carbon taxes to somehow sort this all out.

The warning is stark.  We need "aggressive efforts to reduce emissions now." You haven't got a chance of doing that while these Sneaky Pete, Petro-Pimps talk carbon taxes out of one side of their mouths and massive increases in bitumen extraction out of the other.  Nah, they're just f__king with ya because they know they can get away with it.  And they're right.

Our political leaders won't stick their necks out because our neighbours don't get it. We are a society that condones, even reveres, waste. The best selling vehicles are monster trucks whose owners leave their monster engines idling so to keep it warm in winter and cool in summer. Living near Okanagan Lake I regularly see boaters speeding around in circles for no reason. There are even high powered boats that can travel up the lake faster than the highway traffic. From the back of our house I can watch vintners water their vines from two kilometres away (really); just the old fashioned massive sprinkler with no attempt at all of conserving. Everywhere I go I find discarded plastic bottles. It's all about fun and convenience, you know.

As a species, we haven't evolved much. We know so much about our ancient ancestors from the junk they left behind. We are still doing it but on an unimaginable scale. There's the rub; we can't imagine the damage we're causing. Worse, we can't imagine that we are the problem; it's always somebody else.

We can't avoid the consequences of our indifference, Toby, and we're already being overtaken by events. Every day I monitor events such as droughts, floods, sea level rise, severe storm events, heatwaves and such (Google Alerts does a fine job of aggregating topical headlines). There are clear, immensely powerful and disturbing trends emerging and, as we were warned, the early onset stuff is well underway in the poorest and most vulnerable parts of the world.

Getting something resembling a clear, comprehensive picture of these unfolding crises is impossible if your information stream comes through the filter of mainstream media. It would overwhelm all their other content and, frankly, people just aren't that interested. Dealing with this daily is really quite grinding.

Baghdad, 53C. Tehran 70C+ "wet bulb". Ordinarily mild Tokyo near 40C. The rainforests of the Pacific Northwest tinder dry and burning. There's no end in sight and we know that future years will be worse.

You have to dig into the science sites to explore how overpopulation and over-consumption will inevitably defeat our best efforts to respond to anthropogenic global warming.

Time is an issue that's almost never discussed. We all talk about meeting certain targets by specified dates but both the emissions reductions and the dates are political numbers that usually are disconnected to the developing problems. When this 2C Holy Grail was proclaimed it was said to be the number we needed never to exceed lest we trigger natural feedback loops, runaway global warming. That was a political number. We're still just under 1C and a number of those feedback loops are already active - tundra fires, thawing permafrost, loss of Arctic sea ice, glacier retreat, the accelerating decline of the Greenland ice sheet. We know it's already too late to arrest the eventual total loss of the Antarctic ice fields. That will take centuries but the die is already cast. That impacts hydrology and oceanography, the freshening of our sea water, ocean currents and heat conveyors with their moderating effects that so much of humanity depends upon.

It's all snowballing. There's a lethal synergy to this. Events we were warned, barely a decade ago, could happen by 2100 are already here.

After wrestling with this for several years I finally concluded that we don't have a chance on global warming/climate change unless we simultaneously tackled overpopulation and over-consumption with effective action for they're all intertwined. If you don't identify and address the common threads that run through them, you're screwed. Unfortunately it would mean abandoning 18th century economics, 19th century industrialism and 20th century geopolitics - the very modes of our organization that brought us to this point.

We're not willing to do that, even at the cost of the survival of our civilization. That sounds remarkable but human history is littered with examples of societies, civilizations that could see collapse coming and why but were unwilling to change - until they had crossed their own tipping points and it was too late to change. The difference is that this time we're doing it on a global scale.

You are right about mainstream media indifference. Where have we learned that the Arab Spring including the terrible mess in Syria was triggered by desertification? The mass migrations are being blamed on terrorism but not on global warming. I suppose the media is ignoring this because viewers would rather here about local crime and what celebrities are doing.

We are going over the cliff and we still want to play silly buggers. I fear for my grand children.