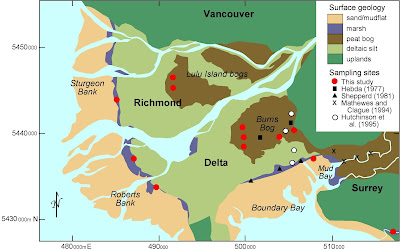 Three inches, big deal. Actually, yes, it is a big deal. In military parlance, it's a "force multiplier." It increases the frequency and severity of oceanic impacts such as coastal erosion, storm surges and flooding.

Take British Columbia's "Lower Mainland" - the large and bountiful Fraser River estuary, home to 2.6-million people. A lot of that area is low lying and vulnerable to spring flooding especially from rapid snowpack melting in the interior.  The Fraser River pours out into the sea but if the sea is three inches higher then that causes the spring deluge to back up, increasing destructive flooding.

So here's NASA's take on what we're facing and what we need to start doing about it.

It has begun. It will speed up. It will probably come at us too fast to do much about it. There have been warnings for a very long time but we never believed that it would happen in our lifetime or even our grand children's.

Those who deny and those who pray will get just as uncomfortable as the rest of us.

I fear that we're about to be overtaken by a number of events largely because we've chosen to look the other way.

I wasn't surprised to see a recent news item in some prominent America media that announced the U.S. was in for at least 3-feet of sea level rise.

We have already triggered a polar, ice-free future - both Arctic and Antarctic. It may take several centuries before the entire Antarctic ice is gone but that's inevitable.

The Greenland ice sheet alone is good for something in the range of 10-18 feet of sea level rise and we won't have to wait several centuries for that to occur.