What Do Ashley Madison and World Espionage Agencies Have in Common? 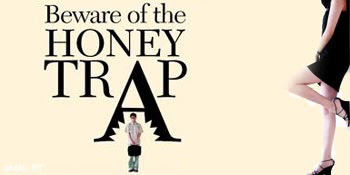 In the old days of the Soviet Union the Russkies were known for employing the "honey trap." That was the name given to using an attractive young woman as bait to sexually compromise a targeted foreigner. Photos would be taken and later used to blackmail the individual to do various intelligence-related things such as handing over state secrets.

Now the 33-million Ashley Madison users outed by hackers are getting the once over from the major intelligence agencies seeking to find out if any of their government's sensitive personnel have been compromised.

Intelligence agencies are trawling leaked data from the hacked Ashley Madison adultery website to glean personal information and even use it as a possible blackmail tool, sources have said.

British spy agencies have already checked the records to see if their own staff could be vulnerable, but are also checking the data for sensitive details on potential intelligence targets.

...A senior government source said the data, which had been published on the dark web, was being checked by British agencies and was considered by spies around the world as a trove of potential information.

Whitehall email addresses, including 92 from the Ministry of Defence, are said to be among the leaked data.

Yeah, well, information is power and highly placed individuals ought to know that better than most.

That's weird. Wouldn't they have already had all this stuff?

Not necessarily, and one thing intelligence agencies always know to do is use as many sources as you can for cross verification purposes. So this clearly is that, and one of the other things people tend to not understand about intelligence agencies is that their problem, especially nowadays but even true in the pre-internet days, is often not that they don't have enough data, it is that they have so much sorting it out into intelligible, meaningful, and useful data is so hard often many times important elements are missed until after the fact when they stand out and are then pointed to and supervisory bodies ream them out for not seeing it from the outset. So something like this database, even with its multiple entries and fake accounts still provides a useful tool for the honeytrap/blackmail side because those who actually were using this site in truth are also almost certainly open for exploitation, in essence it is a major pre-selection filter of exploitable dishonest people for them to use, so I had assumed this was going to happen from the first moment this data went public.

So even if they had this data somewhere else it is likely bundled and jumbled in so much other data it is essentially invisible, but this database is very visible, acts as both a filter and new source creator, and will also help make that buried data more visible by using it as a data point to see if there is correlations within other gathered intelligence. Intelligence work is truly tedious, difficult, demanding, and has so little to do with the fictional concepts prevalent in western society that I would say manga is a more honest reflection of Japanese society than western fiction of the intelligence world is of that reality.

@ PLG - "wouldn't they already have had all this stuff?" Got me but it doesn't seem that way.

The Americans were certainly shaken by the number of .gov and .mil email addresses. The US code of military justice prescribes adultery as an offence that can net a prison sentence and a dishonourable discharge which, in the States, is worse than being a registered sex offender. I'm aware of a number of cases in which American officers and senior NCOs were brought down. There was a reason David Petraeus wasted no time in hightailing it out of his 4-star office and back to civvie street.

@ Scotian. I agree. Details gleaned from the email dump may not even be useful on a stand alone basis but it can reveal data about predelictions, susceptibilities and such.