Where Is the Exit Door? 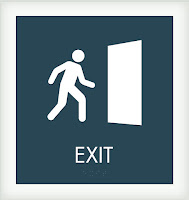 How long will Canada remain under the boot of market fundamentalism? This is the laissez faire face of modern neoliberalism that has taken hold throughout the developed world, Canada included.

It manifests itself most directly in free trade agreements and associated institutions such as the IMF, the World Trade Organization, and the World Bank. Rarely seen is its presence in parallel or "deep government."

Neoliberalism is an ideology and, like most ideologies, it's anchored in both fact and plenty of belief. It's sort of faith-based. Its disciples believe neoliberalism is itself an ethic, in fact the best and preferred ethic to achieve solutions to our problems using the power of the marketplace. It holds that many of the functions ordinarily associated with government can be better undertaken through market forces.

Whether you realize it or not, we've been eating, sleeping and breathing this stuff for forty years. That's been long enough to realize that a lot of the promise of neoliberalism has been hogwash.

Neoliberalism often works at cross purposes to the public interest. Income stagnation is a function of market fundamentalism. Inequality of wealth, income and opportunity is likewise the outcome of adherence to market fundamentalism. It is the engine for transferring wealth from the many to the few and, as so plainly demonstrated by the United States, with that wholesale shift in economic power comes a commensurate shift in political power. This is the rise of illiberal democracy which, unfortunately, is not an outcome but merely an early onset symptom of a darker order to follow. 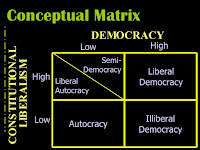 The problem with illiberal democracy is that many of us see it as genuine democracy. We don't see it for what it is, democracy with a potentially terminal disease. If we did we might be less tolerant of market fundamentalism, globalization and free trade that demand the surrendering of various incidents of our national sovereignty. We might reject the rise of state corporatism.

When your highest court holds that a corporation, itself a "legal fiction", is a person with political rights - you have a real problem. When that same top court holds that corporations cannot be restrained from dominating the political process with massive infusions of money for election advertising and campaign contributions - you have a real problem.

As Stiglitz powerfully chronicles in "The Price of Inequality" the great preponderance of inequality in the U.S. is neither merit- nor market-based. It is legislated, enacted by the people elected to represent the people but instead serving the contrary interests of the few and their corporations. This sort of inequality takes many forms - tax breaks and outright exemptions, subsidies, grants, deferrals and, quite regularly, the transfer of national assets such as water either for free or far below value.  This is a "trickle up" economy where wealth finally crystallizes in the accounts of the investor or rentier class.

America has been our laboratory for this experiment in free market fundamentalism, neoliberalism. What are the observed results? A gutted middle class no longer empowered economically or politically; wage stagnation; inequality of all forms; the collapse of social mobility; the rise of the precariat; the formation of the narrowly held, corporate media cartel becoming an instrument of conditioning and distracting the populace; transactional governance (the "bought and paid for" Congress) and illiberal democracy; and the wholesale, unearned transfer of wealth from the many and from the state, to the few.

So, remind me why Canadians want to go down this road? Make no mistake, that is what we are doing.

We're trapped and so long as we submit to political leadership in thrall to market fundamentalism, we'll become ever more tightly trapped. Tom Mulcair caught hell for his support of both Thatcherism and the Canada-Europe free trade deal, the Comprehensive Economic and Trade Agreement (CETA). One NDP apologist came to Mulcair's defence saying it was preferrable that we trade with Europe because of its social democracy. Oh I know - they're thinking of old Klaus with his alpine hat and lederhosen toiling away in the Black Forest banging out cuckoo clocks.

I guess that person didn't notice that Europe is on fire with discontent triggering uprisings from Athens to London. There's not a lot of social democracy on display in the U.K. and it's being ruthlessly suppressed in Greece with Spain, Portugal and Italy soon to follow. They didn't notice the rise of fascism in Britain, France, Germany and as far east as Hungary where it actually holds power. Neo-nationalism is on the march and it is very angry.

Is there no way out? Sure there is but we'll never find the exit door until we get up and look for it, something for which our political caste shows no appetite.

We need motivation to demand something better.  That begins by recognizing everything we're giving up and what's being steadily drained from us in every context - economically, socially, politically, democratically - through free market fundamentalism. This is not theoretical. It is not hypothetical. It is real. We are living it and we all know that we're feeling it.

A good way to start is to read a few books.  Here are some I would recommend.

Joseph Stiglitz, The Price of Inequality.

Gar Alperovitz, What Then Must We Do?

Naomi Klein, This Changes Everything.

Fareed Zakaria, The Future of Illiberal Democracy at Home and Abroad.

If you read those ten books you'll see market fundamentalism in the raw and you'll grasp what will befall us, and especially our kids and grandkids, if we don't get out from under it.

It all begins by understanding what we're up against.


* I just checked and, with the exception of Natural Capital and Human Economic Survival (which I still think is an essential read) all of the titles listed above are available in e-book format from Amazon.

WTF!
Dipper trolls are as obnoxious as Con trolls
The NDP might end up being the only party I don't vote for because of their followers.

It is amazing. This character has made no effort to grasp the subject matter, neoliberalism. Today it's widely bandied about as a pejorative but I've found very few people have a working knowledge of what it is, how it operates and what it does to us.

All three parties - Tory, Lib and New Dem are neoliberal. Mulcair couldn't have made his position plainer than when he endorsed CETA. This DipShit delves into what are, in the greater scheme of things, minutiae to absolve Mulcair of something he obviously finds problematical with his own leader.

You can't have an intelligent conversation about this without a degree of knowledge in the history of neoliberalism; how it came to be; China and America's roles in launching it, each for somewhat different reasons; and why it must certainly fail us over the next decade or two.

The reason I provided that bibliography is to encourage people to look into a very important issue that is almost universally misunderstood. I didn't intend it to be a platform for launching pre-school level debates.

I decided to delete the original comment as it was off-topic. This post is about neoliberalism, not about which leader has the biggest dick.

Canadians for the most part are going to have to learn about Neoliberalism on their own Mound.For the most part, it seems to be the best kept secret in the public domain. Wouldn't it be something if we heard discussions on Neoliberalism, or interviews with politicians whose governments practice Neoliberalism. Wouldn't it be something if it was part of a debate. Is it even taught at universities? It needs to be brought out in the open, the secrecy surrounding it is part of it's power. Probably the people reading your blog and who don't know much about Neoliberalism, will read your recommended reading, because they are interested in learning.An interest in learning does not seem to be an activity that many Canadians engage in and that's what worries me. That combined with the secrecy surrounding Neoliberalism, I think is a deadly combination. If Harper is thrown out in Oct. it won't be because of his Neoliberalism it will probably be because Canadians simply don't like him. Which ever party replaces Harper, particularly Mulcair, can continue on with their neoliberal agenda. It's the path of least resistance for either party for any PM and party to say they will rid of neoliberal governance, is to also challenge the US Euro economic infrastructure and that would take not just knowledge but guts.

About forty years ago a teacher loaned me a book by one Milton Friedman. While the book contained some interesting ideas it lacked heart. It seemed to be a handbook for selfishness, much like Ayn Rand's works. That's the major problem with Harper and crew; they have no empathy for those who cannot keep up.

Hi, Pamela. It's only by exploring the ideology, how it works, that we can see the direct but often overlooked costs it imposes, usually on the people who benefit least from it.

We're regularly sold these deals on the promise of wealth creation but wealth for whom and who is left out?

We've been programmed to believe that duties and tariffs and trade restrictions are universally bad for us but that' simply untrue.

Free trade is about surrendering control over access to your own markets as though that access had no meaningful value. Yet it has great value to someone who gets to jettison his $20/hr. workers to make his $120 a pair runners with $3/day labour. He still has secure access to your market only instead of creating jobs for your people he transforms that into additional profits for himself.

Some people actually believe they saved the country from the manufactured crisis.

Hi Toby. I remember when Milt Friedman came to Vancouver and spoke at the Vancouver Board of Trade some time around 1979 or 1980. He was treated like a Roman emperor by the local media. Part of his talk was shown on television where he made the claim (at the time) that California's largest cash crop was marijuana and that it was people on welfare who were growing it - hence no need for government to pay welfare. Where he dug up his research I have no idea but I suspect he pulled out of his ass, much like the neo liberal policies followed by successive western governments today.