The Best Consolation Prize - EVER 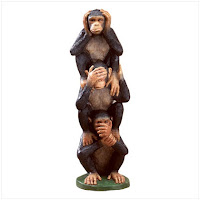 When it comes to the three clown princes vying to form Canada's next government I'm a "none of the above" voter.  That said, it would give me considerable comfort on election eve to see Beelzebub, the Prince of Darkness, Sideshow Steve Harper become the first Conservative prime minister to screw it all up so badly that he lost to the first New Democrat prime minister (even if he is a closet liberal - and, Dippers, you all know he is).  It would also give me pleasure to see the Liberals, having abandoned the centre-left, to be parked in the wilderness - exiled from Sussex Drive, banished from Stornoway - forced to seek refuge in some dank backroom at the Motel 6 out on the Gloucester highway. That, for them, is no misfortune. It's a place well earned and entirely deserved.

I will begrudge the NDP their win for it will consolidate their abandonment of the Left at a time when Canada most needs a strong voice for labour and working class Canadians. You can pretend until your eyeballs explode that your team has it covered. They don't. Mulcair will claim that turf because he remains slightly left of today's conservative-lite Liberals but he's a consummate liar and a pathological snake oil salesman whose type those old enough have seen too often before.

You (We) have to recalibrate the scales, the balance between labour and capital, recognizing that as fundamental to any viable liberal democracy.  None of our political chimps is connecting these dots.  Perhaps that's because they see what that would mean to government and their personal futures.
Posted by The Mound of Sound at 7:05 PM

Unprotected waterways, corporately appointed approval boards, walking through the motions of a watered down (or more precisely oiled up) set of environmental protection rules to push toxic tar through pipelines running from sea to sea to sea are all acceptable to the heir(s) apparent.

Of course, if your own particular brand of partisanship believes in the nudge nudge/wink wink theory of environmental protection, you could proudly vote for the non conservative in your riding.

I just did a motorcycle tour of the island, Willy, and it's scary. Everything is bone dry. There was no winter snowpack to speak of and so all the mountain streams are dry. Reservoirs are dry. Lakes are way down. People in the remote towns and villages are plainly nervous at the growing threat of forest fires.

And all we've got on offer are three "drylanders" who haven't got a clue about what's happening and couldn't care less. They pay lip service to the problem by promising carbon taxes and the boneheads that support them seem to believe that's still a viable option.

Anyong said.....Provincially in AB is turning out to be a farce when it comes down to the Environment...nothing new there.