Harper Could Be In Trouble this Time Around

A recent Probit survey explored how Canadians viewed the upcoming election. One part asked respondents what they considered the most important issue in the runoff.

The economy - growth and jobs - where Harper doesn't have any bragging rights these days was first at 22.1%.  I'm not sure that he can count on getting all that much of that 22%.

Where Harper is likely facing a shut out is on the second and third ranked issues, income inequality and climate change and the environment at 18.7 and 18.6% respectively. Those are followed up by social issues such as health and education, another Harper tar pit, at 15.6%.

The overall picture is that everything we the people care about are things Harper doesn't. Everything Harper wastes his time beating his chest about are the things we care least about.

Oh, Stevie boy - watch out, the wheels are coming off! 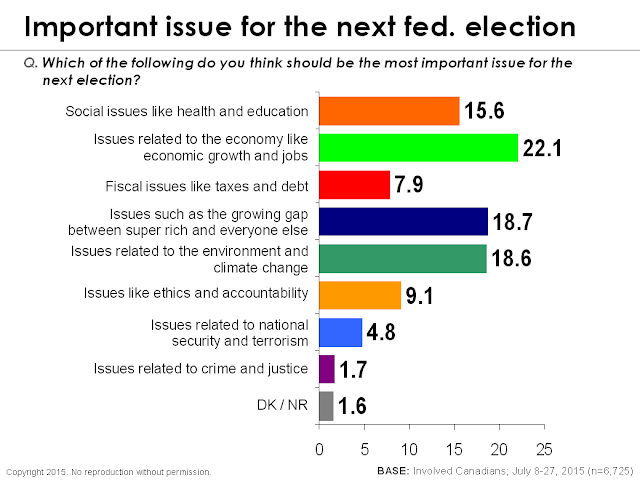 .. wonder how Canadians feel about Harper Government
manipulation obstruction bribery interference violations complete deceit
Here's a nice concise eye opener on so called Harper Conservative Values
http://huff.to/1J5NjuV
as revealed by Nigel Wright PMO et al emails re Duffy Scandal
and that damning info does not include all of the emails
or cross examination from Duffy's Lawyer
much less Duffy's still to come testimony

He's been living in a bubble, Mound. It looks like the bubble is about to burst.

The bubble may be bursting but Harper cheats.