"What the plebs don't know won't hurt them me" 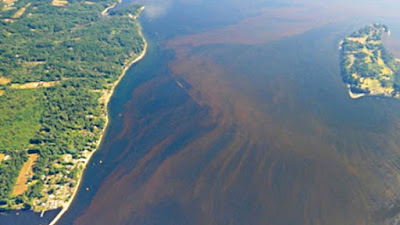 The peckerhead who currently rules Canada in the guise of a prime minister must be thanking his lucky stars that he doesn't have to worry about nuisance reports from federal government scientists about the massive algae bloom along the Pacific coast of North America from California to Alaska.

Sideshow Steve Harper, as part of his scheme to work over British Columbia in preparation for bitumen supertanker traffic, gutted fishery and navigation regulations and shut down entire sections of the Department of Fisheries and Oceans, the folks who might tell tales out of school.

By happy Harper coincidence there's no one around to discuss "the Blob" or its ramifications and its connection to climate change.  The name refers to huge tract of ocean in the northeast Pacific that's about 3 degrees Celsius warmer than normal. It's widely believed that the Blob is linked to climate change and is responsible for this monster algae bloom that girdles the coast and is up to 64 km. wide and, in some places, almost 200-metres deep.

CBC News has an interesting report on the  algae bloom and what's being done to investigate it. The report is full of quotes from scientists from the US National Oceanic and Atmospheric Agency (NOAA), state officials from Washington and Oregon, and a number of research scientists. What's conspicuously missing is any information from Canadian sources, presumably because Harper has seen to it that they're an endangered species.
Posted by The Mound of Sound at 11:38 PM

Those ocean scientists may still exist here. But they are muted. There is a long arduous process for any reporter trying to interview a Canadian federal scientist. So, deadlines pass, and stories may appear, but, like this article at CBC news, from a US perspective.

It would be very interesting to me if CBC tried, or is trying to interview Canadian federal scientists for a follow-up.

Chris, I happened to speak to a DFO researcher a few weeks ago. He didn't speak out of turn, by any means, but he did confirm what's been reported in the media about how they've been gutted and gagged.