On Bullets Dodged - For Now

Just back from a motorcycle tour of the island from Gold River to Port Renfrew in the southwest and back to my place on the east side.  You don't have to get too far off the beaten path to get a clear understanding of what's going on.  The most striking observation was how perilously dry this rainforest has become - everywhere.

Dried up reservoirs, lakes with that "climate change ring" along the shorelines, creek beds down to remarkably clean but bare rocks that were once washed with cold, crystal clear waters.  You don't have to get more than fifteen to twenty miles in from the ocean before temperatures soar.  You look around and it's all a giant forest fire waiting to break out.  Even on the highest peaks not a trace of snow remains.

It now looks certain that we're in for a very powerful El Nino later this year. That brings coastal BC a mild, dry winter - the very last thing we need.

The island has dodged a bullet - so far - but the odds aren't on our side.  Then, on my return, I read an article from TomDispatch.  This line struck an awful chord:


When fire can eat a rainforest in a relatively cool climate,
you know the Earth is beginning to burn.

The wettest rainforest in the continental United States had gone up in flames and the smoke was so thick, so blanketing, that you could see it miles away. Deep in Washington’s Olympic National Park, the aptly named Paradise Fire, undaunted by the dampness of it all, was eating the forest alive and destroying an ecological Eden. In this season of drought across the West, there have been far bigger blazes but none quite so symbolic or offering quite such grim news. It isn’t the size of the fire (though it is the largest in the park’s history), nor its intensity. It’s something else entirely -- the fact that it shouldn’t have been burning at all.

We're no strangers to drought. Dry conditions are normal from July through the end of September. The forests are usually well soaked during the rest of the year and we normally have snowpack on our mountains well into July, some higher peaks into August if not year round.  We didn't get the heavy winter rains this year, nor the vital snowpack they bring.

Towns, their officials unprepared for climate change, are running out of water. No one has been willing to invest in infrastructure (reservoirs) to capture the runoff during heavy rain events when we do get them. Yet they're still willing to issue building permits to developers even as they cannot provide water security to existing residents.

Growing up in central Canada, people would say, "it's not the heat, it's the humidity."  People in the Great Lakes region don't need that explained to them. I'm not sure if the term is still used but it used to be called the "humidex" factor. It could make a 30C day feel like it was 36C.

How does 73 degrees Celsius strike you?

In the Iranian city Bandar Mahshahr, the mercury soared to 46 C on Friday as an unprecedented heat wave enveloped much of the Middle East. With humidity, however, the air felt more like 73 C, according to AccuWeather.

A port city located in Khuzestan province in southwestern Iran, Bandar Mahshahr has its proximity to the Persian Gulf to blame for the incredible temperature readings, AccuWeather meteorologist Anthony Sagliani said.

"Around the Persian Gulf, where water temperatures are in the lower to middle 90s [30s C], the extreme heat combines with incredibly high humidity to produce astounding apparent temperatures," he said.

Did you get that? Water temperatures in the Persian Gulf in the 30s (Celsius). Normal body temperature is only 37C. You might also want to steer clear of Baghdad.

To the west, temperatures also reached above 50 C this week in Iraq, with a reading of 52 C in Baghdad on Thursday.

The relentless heat prompted the Iraqi government to implement a mandatory four-day holiday starting on Thursday. Residents were also urged to stay out of the sun and drink plenty of water.

Unlike other countries in the region, Iraq lacks beaches, and travel restrictions make it difficult for people to escape the sweltering heat, leaving many — even those fortunate enough to live in their homes — with limited options for cooling off. Some swim in rivers and irrigation canals, while others spend the days in air-conditioned shopping malls.

Climate change is here, kids, and it's here to stay.  From heat waves to sea level rise, from droughts to heavy floods, we've moved to a new climate that is going to be immensely destructive, disruptive and dislocative.  This is no longer a threat of something that might happen in the future. It's happening. It's here and it's worsening. And we're not doing a damned thing about it. Not a thing.

So who is prepared to act - Justin? Tom? What have you been hearing?  The usual bullshit about carbon taxes, is that it?  What's that strange noise? Why it's the sound of them jerking your chain.

Update: I went out yesterday late afternoon to refuel the Great Yellow Beast and as I rode out of my garage I heard an unmistakable sound overhead, our last remaining Martin Mars water bomber immediately overhead.  The thing is so huge it can appear to be crawling through the air.  On the island that plane is associated with our salvation from these damned fires. 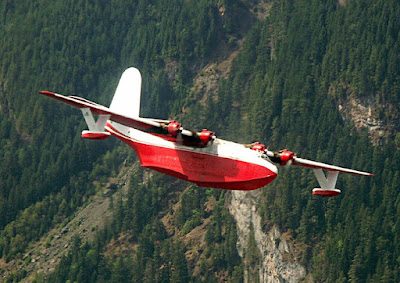 Anyong said.....It is extremely dry here in AB while poor old Newfoundland hasn't seen the sun much and where the temps are very low this summer.

You should read your own blog, Mound. A fleet of a thousand Martin Mars won't save you from what's coming.

I'm not under any illusions, Anon. I guess I get sidelined worrying about our kids and grandkids, frustrated at how we and our chosen political leaders are setting them up, worsening whatever fate will befall them.

.. thanks for the eyes on appraisal from the beautiful island
and glad to hear you're wheelin the beast out there..
clears the head & gets the heart a pumpin big time
best way to experience this big land

I do hope to be part of the solution
Keep on keepin on .. !

The signs are everywhere, Mound. Only a fool would refuse to see them.

@ Sal - I resisted the urge to prowl up the forest service/logging roads for fear of doing something careless that could spark a fire. It really is that tinder dry.

@ Owen. I spent some time this morning scouring for the major parties platforms on climate change. There really wasn't much to read. The usual stuff about carbon pricing. The Greens have a proposal to increase our rail network including high-speed where viable (Windsor-Montreal corridor, I expect).

There is a huge need for green infrastructure development - real stimulus spending - rail, reservoirs, transportation grid upgrades, from coast to coast to coast.

Now is also the time to engage on sea level rise adaptation. Somebody has to keep those ports open. Naturally this isn't even on any of the mainstream parties' agenda.

"There is a huge need for (green, preferably) infrastructure development..."
and then our Führer is proposing a nonsense stimulus of renovating basements. He must get turfed out together with the bathwater, er.. his platform...
A..non