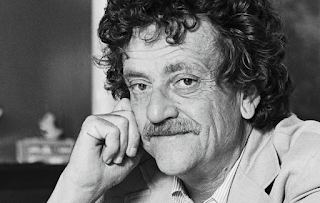 Vonnegut wrote a letter to the citizens of Earth in 2088. He wrote of future perils that, in some ways, have already come to pass. It was advice that almost no one heeded.


Now that we can discuss the mess we are in with some precision, I hope you have stopped choosing abysmally ignorant optimists for positions of leadership. They were useful only so long as nobody had a clue as to what was really going on—during the past seven million years or so. In my time they have been catastrophic as heads of sophisticated institutions with real work to do.

The sort of leaders we need now are not those who promise ultimate victory over Nature through perseverance in living as we do right now, but those with the courage and intelligence to present to the world what appears to be Nature’s stern but reasonable surrender terms:

1. Reduce and stabilize your population.

2. Stop poisoning the air, the water, and the topsoil.

3. Stop preparing for war and start dealing with your real problems.

4. Teach your kids, and yourselves, too, while you’re at it, how to inhabit a small planet without helping to kill it.

5. Stop thinking science can fix anything if you give it a trillion dollars.

6. Stop thinking your grandchildren will be OK no matter how wasteful or destructive you may be, since they can go to a nice new planet on a spaceship. That is really mean, and stupid.

Vonnegut's letter was published in Time magazine and has been recently recycled. Like so many things, KV did "see it coming." And, yes, we are still choosing "abysmally ignorant optimists for positions of leadership," people skilled in just one thing - telling us what we want to hear.

h/t Danneau
Posted by The Mound of Sound at 8:44 AM

Vonnegut's "ice nine" is a brilliant allegory for many of humanities self-inflicted afflictions ...
He was prescient ... Cat's Cradle was published in 1963, 25 years before this letter.

Most of Vonnegut's books are still available at very low prices. I picked up 3 or 4 last year, all reprints.

It always amazes me, point 6 isn't' taken as seriously as it ought to. People need to understand that "space ship" will be for the 100 most wealthy people in the world. the rest of the common folks will be left to die.

when I read how the oceans will rise by 2050, and think of my friends children and grandchildren, I do wonder what they are going to do. When we look at New Dehli, India and the smog there right now, that ought to be stopped. Its not a national issue, its international. the earth rotates on its axis.

Countries need to take responsibility for high birth rates and do something about them. China may not have gone about it in the correct manner, but at least they knew they had a problem. India and other countries just ignore it.