He Said What? Colorado? 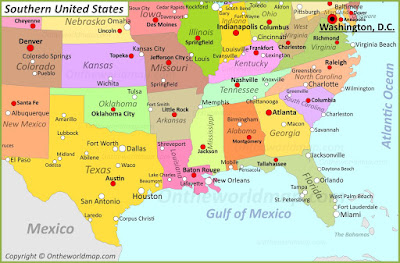 One of the first things he did on assuming office was to have his lawyers issue warnings to every school he'd attended not to release his records. We'll never know how well or poorly Donald Trump fared as he passed through the educational machine. One professor from Wharton has said he found Trump pretty stupid but, beyond that...

One subject Trump didn't master was geography. That much emerged at a Trump rally in Pittsburgh where Trump delivered the now obligatory update on his wall along the US-Mexico border.

Colorado. The nearest Colorado gets to the Mexican border is 400 miles.  Maybe the folks from Colorado have something against the folks from New Mexico or Texas or Oklahoma. Maybe they figure why should they not have a wall, some sort of wall?

I guess we shouldn't be too hard on Trump. Denver is a long way from Mar-a-Lardo.
Posted by The Mound of Sound at 9:03 AM

I've just sent an e-mail to my friends who live in Colorado, just north of Denver, to ask if they have a route around Trump's fabulous wall so they can join us again this winter in Arizona. What do you think, Mound? I sure hope they have their passports up to date!


Lulymay, how do you know Arizona won't be walled in by then? I actually believe America could use a wall, one along the lines discussed by Chuck Thompson in his book "Better Off Without 'Em: a Northern Manifesto for Southern Secession." See if you can get a copy. Amazon has it in paperback for 13 bucks and change. The NYT calls it "savagely funny." Just the sort of thing for a road trip. Enjoy the sun and the warmth.

Perhaps he'll use a sharpie to connect New Mexico to Mexico.


Be careful, Owen. That sort of suggestion might get back to him.

I stumbled across this the other day.

"If you don't know how Trump still has even 40% of the vote, just remember we Americans need warning labels telling us not to eat soap."