In Trumpland, Everything and Every One is Expendable. 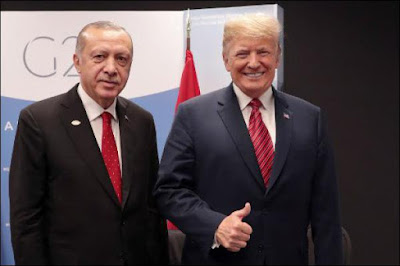 One thing Donald Trump will never suffer from is an excess of empathy or responsibility or integrity.  He exists to pursue but one thing - whatever suits his interests and whims. That intense focus is why he has accomplished next to nothing in nearly three years in office.

Trump is, if anything, promiscuous. He will get into bed with anyone and never an apology. Kim Jong Un, sure. Mohamad bin Sultan, every day. The Taliban, why not?

Here's the latest. This time it's Recep Erdogan.


The White House has given the green light to a Turkish offensive into northern Syria, moving US forces out of the area in an abrupt foreign policy change that will in effect abandon the Kurds, Washington’s longtime military partner.

Kurdish forces have spearheaded the campaign against Islamic State in the region, but the policy swerve, after a phone conversation between Donald Trump and Recep Tayyip Erdoğan on Sunday, means Turkey would take custody of captured Isis fighters, the White House said.

It has also raised fears of fresh fighting between Turkey and Kurdish forces in Syria’s complex war now the US no longer acts as a buffer between the two sides.

Trump defended his decision, saying the Kurds were “paid massive amounts of money and equipment” to fight and that he was leaving the fight against Isis to others for the time being.

With Trump in the White House the US has no allies. An ally is someone you can rely upon. No one can rely on Donald Trump. All you can do is try to hear that bus coming before he shoves you straight under it.

There tends to be knee-jerk reactions around tRump. Let's just get some perspective here.

If a 'conventional' president (the Bush boys, Clinton and Obama) had made the decision to pull out, it would be a 'clandestine operation easing Turkey's way in.

Trumps dislikes conventional war. (His fondness for nukes is a worry on a different level.) And he has watched as 'quagmires' destroyed past presidents.

Hence the need to get out of Syria. (Can we really criticize him for that?)

By doing his Pontius Pilate act, Trump has actually given (Assad, Putin, who-else?) a heads up and (imo) messed with Turkey's aggressive plans.

Interesting scenario, NPoV. We shall see.