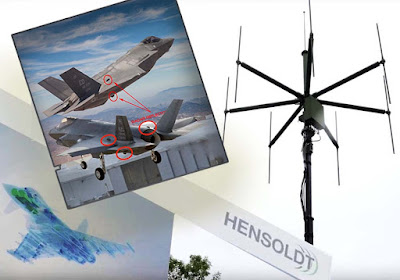 It was always a matter of time before the sine qua non of the F-35, its vaunted stealth invisibility, was countered. Since man realized that rocks were much more effective when tied onto sticks, ever weapons breakthrough has been countered. Some times that happens when every adversary unlocks the magic of a new technology and deploys it. It also happens when the new technology is countered, effectively defeated.

A good example is the AIM 9 Sidewinder air-to-air missile. The Sidewinder is a heat-seeking weapon. A sensor in its nose detects the heat of a target aircraft and steers the missile to it. The US developed and deployed it. The Soviets stole one from an airbase in Germany and copied it. The US improved theirs. The Soviets improved theirs. Meanwhile other nations fielded their own heat-seeking missiles. Along came counter-measures, primarily flares that generate massive heat plumes to decoy an incoming missile away from the target. Today, everybody's got them - heat-seekers and counter-measures -  and they're all pretty good.

Now it's the F-35's turn. Once again, a lot of America's magic technology was stolen. Some of it (a lot, actually) was hacked right out of the computers of F-35 contractors. Then there was that unfortunate capture by the Iranians of a Lockheed RQ-170 stealth drone. That yielded no end of intelligence to Russian and Chinese engineers from shaping and materials such as radar absorbing coatings to the electronic wizardry inside. This enables both copying and the development of counter-measures to defeat the F-35's stealth cloaking.

The Americans and Lockheed have kept a straight face in claiming that the F-35 remains invincible. Of course the only way to prove that will be when it is unleashed on a "peer adversary" - i.e. Russia and China which is when we can expect to see what stealth-killing technologies they've developed. Of course a stealth, surprise attack by US forces into Russian or Chinese airspace could easily escalate into a nuclear exchange so that's not really likely to happen.

However Canada is about to buy a new fighter to replace the aging CF-18s bought by Trudeau (not Justin, Pierre).  At first Justin Trudeau ruled out the F-35 but, hey, it's Justin. Let's put it this way, the F-35 is back in the running for the contract.

Which means we need to ask whether this hyper-costly, 20-year old airplane and its technological wizardry are still viable and worth the money.  Is the F-35 still stealthy?  A German radar company, Hensoldt, may be able to answer that. The company claims it has a passive radar system that easily detects the F-35.


Passive radar equipment computes an aerial picture by reading how civilian communications signals bounce off airborne objects. The technique works with any type of signal present in airspace, including radio or television broadcasts as well as emissions from mobile phone stations. The technology can be effective against stealthy aircraft designs, which are meant to break and absorb signals from traditional radar emitters so that nothing reflects back to ground-station sensors, effectively leaving defensive-radar operators in the dark.

Because there are no emitters, passive radar is covert, meaning pilots entering a monitored area are unaware they are being tracked.

There are limitations to the technology. For one, it depends on the existence of radio signals, which may not be a given in remote areas of the globe. In addition, the technology is not yet accurate enough to guide missiles, though it could be used to send infrared-homing weapons close to a target.

Hensoldt showed up to a Berlin air show where the flight line was graced by two Lockheed F-35s. While other manufacturers put on impressive aerial demonstrations, the Lockheed fighters did not join in.  Hensoldt engineers then left the airfield but, instead, set up their gear at a nearby horse farm and waited patiently for the F-35s to depart after the crowds were long gone.  Apparently they got the data they were after.


Whatever Hensoldt's claims, the German military has embraced passive radar as an emerging technology key for future capabilities, including air defense. Earlier this year, the country's air force was in the process of creating a formal acquisition track for passive sensing, Defense News reported.

...Also noteworthy, in the year and a half that followed the air show, emphasis on stealth features for the Franco-German-Spanish Future Combat Air System program, meant to be Europe's next-generation warplane, shifted.

Officials from the industry teams involved in the program increasingly converged around the idea that stealth as we know it had lost its shine — this following rumors circling the German defense scene about how Hensoldt had apparently managed to light up the American aircraft on the radar screen.

Canada's military brass are dead keen on the F-35 but their reliability hasn't been unblemished in recent decades. Maybe, when the RCAF stages a fly-off to test the Super Hornet F-18, Lockheed's F-35 and SAAB's Gripen, Team Hensoldt should be invited to Cold Lake - as a government consultant.

The Europeans may be on to the limits and vulnerabilities of the F-35s supposed invisibility but, apparently, so is the Pentagon. As the F-35 is still a way from entering full production, reports are emerging that the US brass are in a hurry to move on to its replacement, hoping to have it operational within a decade, two at the outside.

The high cost, high tech airforce is at risk of becoming target practice .

There was an even older PM article that I cannot find that suggested cellphone technology could be used to detect stealth aircraft.

I the endgame Canada will purchase aircraft to dovetail in with Anglo American foreign policy and not to protect Canadian airspace.

The problem with drones, Rumley, is their limited utility. For swarming ground strikes they can inflict great damage on fixed targets.

They're not particularly useful for air defence, especially over large areas, or for establishing air superiority. That said there is some support for pilotless air combat vehicles. That gets into the debate about machine predictability versus human illogic, creativity and instinct.

I recall the article, TB. It reported that anyone who had the guts of 7 or 10 of the latest iPhone could build a stealth detection system. Maybe that's so. I don't know.

China claims it has developed an anti-stealth radar system. Australia's Jindalee radar claims an Over The Horizon anti-stealth detection capability. It's said that Jindalee can track an aircraft by its wake turbulence.

More recently there's been considerable work on 'sensor fusion' for air defence missiles that combine both multi-band radar plus infra-red sensors that allow both initial long-range detection and onboard mid- and short-range targeting. Long-range systems guide the weapon to the target until short-range systems kick in to take over the terminal guidance. The same fusion idea is being employed in ground based radars.

The Saudis' payed over the top for the most expensive, most hyped American air defense system. It , of course is a bribe and a subsidy to US aerospace industry, and completely useless against a low tech , low cost drone attack.

Drones may not be particularly useful for air defense, but nothing the US defense industry makes is either. Buying ineffective Patriot missiles didn't help much, but wasted lots of cash.

Buying F35's won't protect us but will replace Viagra for some senior military officers for a few nights.

.. in general, our perception re aerial warfare is still rooted in WW2 ..
In reality.. its directed via satellite
or safely via somewhat 'local' AWACS ..
not by some home base direction..
though data may be centralized, coordinated
and sent from there to aircraft

Air attack and engagement is seen from 'over the horizon'
and air to air or ground to air missiles launched accordingly
Data is shared instantaneously.. launch almost automatically
and that includes ground to air defense rings

Canada has no place in this modern world of warfare
We cannot afford or catch up or keep up..
We are the poor cousins.. and amen to that

What we are good for is 'boots on the ground'
Infantry.. mebbe with tanks.. which are also outmoded
The delivery of such outmodes armour is astonishing
in logistics and support crews..
Hell, its called a 'supply train' for good reason
and all military strategy identifies it as target

Hell, we cannot even properly patrol our coasts
we have no truly functional submarines
We cannot even refuel aged frigates offshore

Can we begin to truly handle Search & Rescue ?
And that's not a criticism of our current SAR crews
They risk their lives daily.. even in training flight & ops
and sometimes in ridiculous weather situations, conditions
Newfoundland, west coast, you name it.. they will fly

We would be attempting to ape American capability
but with no boomers, no carriers, no air threat, no support train
just boots on the ground.. Canadian boots & troops yes
willing and able.. but todays wars are not The Somme
not over the top charges.. out of the trenches suicide


The threat of drone swarms is driving American research into charged particle weapons that can fire bursts at multiple targets. It's just not practical to launch missiles costing many hundreds of thousands (and considerably more) to take down a low, 5-figure drone especially if you can't guarantee one-shot/one-kill.

No, Sal. Modern air combat remains anchored in "Dikta Boelcke," Oswald Boelcke's text on dogfighting. Oddly enough I am reading that at the moment, in English of course. History has shown that every time we figure Boelcke's wisdom is obsolete we get bit in the ass. That happened to the US in Viet Nam and led to the formation of their Top Gun programme.

As for Canadian defence needs I am worried about our vulnerability in the Arctic. I came across a piece today about how Russia has doubled its military shipments to the far north this year.

As for Canadian defence needs I am worried about our vulnerability in the Arctic. I came across a piece today about how Russia has doubled its military shipments to the far north this year.

With due respect; what do expect to happen, a Red dawn from the north?
I can vividly remember the days of glasnost when US and western countries flocked into Russia and suddenly all was forgiven and all were friends.
WTFH, we are still the same people.
We need to spend more monies on diplomacy not weapons.

FWIW, Oswald Boelcke was the hero of many , including Hermann Goering who was himself an accomplished air fighter.

The Russians certainly claim their S500 anti-aircraft/missile system has no problem tracking the F35. Lord knows, even the two generations old S300 isn't too dusty, which is why both Turkey and india are buying the S400 despite US threats of this and that. Saudi Arabia wants it too - Clown Prince Salman may be nuts but he's cunning. The Houthis are handing his ass back to him despite all his costly US hardware. Time for an S400 battery or three.

This has quite a few detailed, well-thought out and technical answers.

As for Canada, by the time the pols in this election hand all our tax money back to us and go hoarse from promises and broke at the Treasury, it'll be another twenty years before we get around to buying a fighter from anyone. Look at our past history of capital defence acquisitions.