For Boeing, It Only Gets Worse. 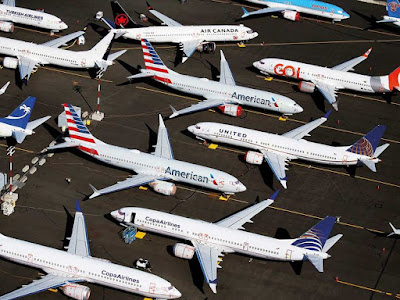 Long before two Boeing 737 Max jetliners nose dived into the ground extinguishing the lives of all aboard, the company's chief technical pilot knew the jet's automated MCAS system had critical problems.

Boeing's chief technical pilot on the 737 Max project told another employee in 2016 that there were "egregious" problems with the jet's automated MCAS system, two years before the first of two fatal crashes attributed to the system, The New York Times reported on Friday.

Internal instant messages sent by Mark Forkner, the chief technical pilot, and another Boeing employee in 2016, were found by Boeing "some months ago," according to a report from Reuters, which first reported on the messages. However, Boeing did not turn them over to the FAA until Thursday.

The FAA told Reuters it found the messages "concerning" and "is reviewing this information to determine what action is appropriate."
Forkner was previously reported to have pleaded the fifth after being subpoenaed for documents as part of the Justice Department's investigation into the Max.

Boeing execs appear to face criminal liability. They knew the MCAS system was defective, potentially lethal. They concealed the defect from the FAA. They concealed it from their customers who operated the type, even after the first disaster. They guarded their secret as the second jetliner was driven into the ground. Hundreds of deaths can be associated with that concealment. Surely that's some form of mass homicide.

Until we learn to put corporate miscreants in jail this behavior will continue.

I drove passed Boeing field in August; quite a parking lot of 737's to be seen.
I wonder just how much LM of F35 fame are hiding deficiencies in their aircraft?
To be sure the industrial military complex is a pox on our times.

They should do major time. Bets as to whether they'll actually do any?