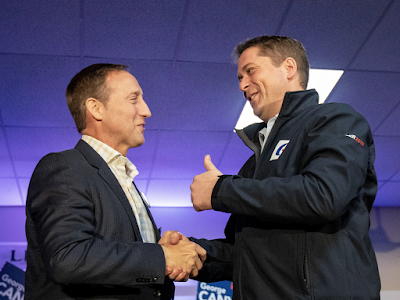 Having sold out the Progressive Conservatives to Stephen Harper, Peter MacKay is looking to climb over Andrew Scheer's moribund corpse to capture the Tory throne. And he has the gall to say that Andrew Scheer "stinks."

He offered the devastating critique of Scheer’s campaign performance during a panel discussion Wednesday hosted by the Wilson Center in Washington.

“To use a good Canadian analogy, it was like having a breakaway on an open net and missing the net,” MacKay said.

An increasing number of Conservatives, disappointed that Scheer was unable to defeat the Trudeau Liberals, have begun openly calling for him to resign and make way for a new leader who can expand the party’s base and gain more traction in Ontario and Quebec. MacKay — who briefly led the Progressive Conservatives before they merged with the Canadian Alliance to form today’s Conservative party — is prominent among those named as a potential successor.

MacKay, shown above shaking Andy's hand, demonstrates that it only takes one hand to shake, leaving the other free to wield the skinning knife.

What a difference a day makes.  Pete, it seems, had a late-nite change of heart. A few pointed phone calls perhaps?


"I've repeatedly said I support Andrew Scheer and I worked very hard to help in the campaign," he wrote.

"Reports of me organizing are false. Recent comments are about our party's shortcomings and making the necessary improvements with modern policies and better coms so we can win the next election."

But, Pete, you've got a history of repeatedly saying things. Remember that solemn pledge never to betray the Progressive Conservatives to Harper? I'm sure you said that repeatedly. Eh, Pete? D'incha?

.. ah.. The Whine Of The Ancient Maritimer - from the famous Coleridge poem
The story always held that the albatross aka the Goony Bird.. was a good luck charm to most mariners. To kill it was to court bad luck at sea. But a sailor slayed the albatross with a crossbow as I recall.. soon they hung the dead seabird around his neck and bound him high on the mast.. indeed bad luck followed. It was much like sneaking a woman aboard for ordinary seamen's pleaure in the forward focsle regions. Any port in a storm, Mound.. The Boss calls him 'horse face' McKay.. and sees him as duller than a sack of hammers.. chortles about how he borrowed a neighbor's doggie for a photo op to make him look like a nice ordinary feller like Andrew Scheer.

He ripped off David Orchard for the Prog Conservative 'leadership' and he himself was then ripped off by Stephen Harper in a hostile 'Brand' takeover.. Haroer of course was desperate for a useful known Brand that had a known base that would auto supply a 30% vote every election.. like Pavlov's Doggie would on hearing a bell. McKay is known to be dog man.. or rather, implied that his dalliance with Ms Stonach ended as she was somehow either with fleas.. or had something doglike to her.. Whew !

McKay is of course the entitled helicopter fisherman.. who used a military chopper on one expedition in Newfoundland/Labrador as Minister of Defence With a Fly Rod.. and the resulting coverup of that piece of horse faced deceit by senior Officers and down the chain of command was laighably caught, as the militsry has to generate orders on paper in triplicate via the Staff Sargeants who actually run the military. Along with that great General and fellow military genius Harper.. they bungled and stumbled with the Afghan debacle. Omar Khadr and his deserved 10,000,000 $$ legal settlement will forever hang on both of them.. They colluded and denied, delayed re Afghan prisoner torture and handoffs to allies.. and eventually prorogued Government to quash their scandal.. twin sacks of dull hammers make a fine pair of runaway sea anchors..

Andrew Scheer is no able seaman either.. as he is proving a failure at navigating and I'm unable to identify when he crossbowed his albatross. We know he can't skate, so McKay's other anaolgy of 'missing an empty net'' is a dog that don't hunt.. Poor little Ottawa boy Andrew.. never skated on the Rideau Canal.. a deprived childhood.. son of an American dad who could not afford skates, nor his Canadian mom either.. wah !!

Remember the good old days when the hanging albatross party was just CRAP ? Now Potato Pete wants to make it even crappier.

All of which goes to show, Mound, that integrity and honour are not prerequisites for contemporary political leadership, eh?

God, we're a hockey obsessed nation. I guess it's been twenty five years since Labatt's kindly purchased a couple of world series pennants for their Canadian customers, but talking hockey during the world series???

And the analogy was off - Jr was scoring own goals. He just had to stop long enough to let Scheer & his CONs bask in the illumination of the writ period.

And methinks Mr. Scheer will be around for at least one more election.

1) CONs don't want the Ambrose/Chong leader types. After all, our favourite handsome racist won their last leadership contest ... just before the ballots were destroyed and Scheer declared winner. Fixing another race so soon might be a stretch.

2) Canadian CONs thrive on staid, incrementalism. (The folks in charge, not their base, the angry rabble they exploit.) Most of what Harper accomplished was done by 'order in council' and by appointing CONs to the courts and other institutions.

3) CONs know they will only win if they hide their policies and wait for the Libs to implode. Scheer is exactly the leader they need.

.. hmm. Northern POV posits something to think about ..
but I see Scheer rudely pushed aside.. within two years
Vacating his free ride for his brood of seven..
including himself

He's pedantic .. an instant replay machine of himself
scripted and schooled, rehearsed one supposes by Hamish Marshall
Glib as hell, but he gets the base 30% Harper lusted for
plus some fringe.. how nice, how quaint..

Uh oh.. here cometh sack o hammers Peter McKay
Thinking perhaps.. he can now reclaim
the Harper Royal Rump he stole
from David Orchsrd.. and in turn, stolen from him by Harper

Not so good for Canada eh.. but hey !
Who's to say what political Parties really stand for anyway..
.. if anything ... ?

The Globe is running a 3-part series exploring Scheer's 'failure to launch.' The good news, for Liberals, is that they're not really blaming Scheer so much as an atrophied, out-of-touch and demographically distant Conservative Party. Yet it is the third of Canadians who adhere to that nonsense that constitute the Tories' base, their only support. The rest of Canadians just aren't interested. To most Canadians very few still see the Tories as a viable 2nd choice.

The Conservatives still have a lock on the prairie provinces and the eastern part of BC but they're being squeezed out of the Maritimes, Quebec, Ontario and the populated part of British Columbia.

As the millennials and even younger voters come onstream the Tories have cause to rue the day they expelled their progressives from the far right movement. They're out on a limb, sawing the branch behind their perch.

Presto and Harper created this fiasco and Scheer is powerless to change course. When you're clinging to the angry old white man vote, you're in trouble.