The Assembly of First Nations Says the Choice is Clear. It's the Green Party, By a Landslide! 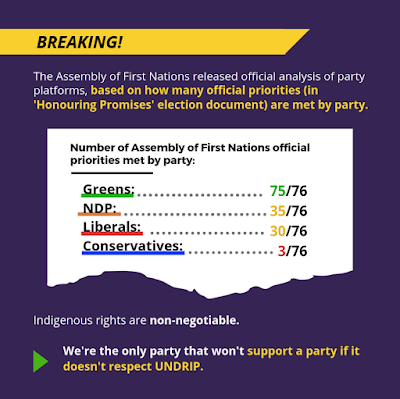 You can read the AFN's entire 2019 federal election analysis here.  Jagmeet Singh has the nascent Dippers all tumescent with his one-liners but he's just peddling greenwash. If you're truly concerned about the climate crisis, voting New Dem is almost as bad as going for the Liberals or the Tories.

The CBC hired consultants to examine the parties' climate platforms. Three of them, 'if' they kept their promises (as if) would leave Canada in the narrow 600-650 ppm GHG category and that's catastrophic. Going from  bad to worse to worst, it's the NDP, the Liberals, and everyone's favourite, the Conservatives.

There's another party, one that has been working on the crisis for years. Their platform would bring Canada into  450 ppm territory. And, for all the Liberals who'll howl how that would wreck the economy, the experts conclude that's a load of crap.


The NDP’s plan, which is being touted as "A New Deal," only outperforms the Liberals by about 12 megatonnes. Meanwhile, their plan would have a more significant negative impact on economic growth. The party's plan relies on government funding for many of the policies — things like $1.5 billion for green innovation, $2.5 billion for home retrofit incentives and $6.5 billion for electric vehicles and transit.

...The Greens have proposed policies that radically transform some Canadian industries. They propose, for instance, banning oil fracking, which means shutting down most oil production in Canada outside of the Alberta oilsands.

"The Green Party is the only party that is taking us to deep levels of decarbonizing the economy and deep emission reductions," said [Waterloo prof, Angela] Carter.

"They give us a fighting chance of doing our part in the global community of keeping global temperatures to a 1.5 C of warming."

..."When I look at that GDP data I'm actually pretty reassured," said Carter. "I mean even the Greens have what we've been calling the most radical policy here. They are not bringing us into recession. This is not a recessionary picture at all."

The bottom line. There's only one party taking the climate crisis seriously and, unless you're a Green, it's not yours.
Posted by The Mound of Sound at 3:59 PM

Yup. I voted Green a week ago.

The people who waver and claim to vote strategically aren't committed to anything, except what they don't want. It's a useless stance for everyone concerned. Puffs of smoke.

I want those party sniffers who go over voting results poll by poll to see, hey, there are Greens here, people who didn't listen to the usual big party BS fearmongering and mean what they voted for, no mistake.

Well, BM, it's all over but the crying. The Greens put out a well thought out platform, the product of years of diligent work but the public either doesn't care, especially about the future, or had other priorities. What do you think, is Andrew Scheer the greatest threat to Canada, especially our children? Yet many Canadians will see stopping him rather than existential threats as their priority.