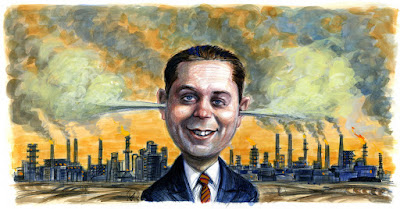 Why is Justin Trudeau our prime minister, not Andrew Scheer?  According to an item I picked up on CBC this morning it could be that 'Summer Help' Andy was laid low by climate change.

As the story goes the total lack of any viable plan on climate change put off enough Ontario and Quebec voters to cost Scheer the premiership. Scheer, being a godly man, would have to write that off to Divine Retribution, I suppose.

I did choke a bit when the reporter used the term "viable" plan. You see, the only viable plan that was put before the public came from the Green Party but they got little mileage out of it.

You can't have your pipeline and eat it too and, if the Bitumen Boondoggle doesn't collapse under its own weight first, as the climate emergency worsens and the impacts spread voters will increasingly see straight through the nonsense being spun by the Dauphin and Jaggy too.  Eventually, and very probably too late to do any good, you won't get far in an election without an effective climate strategy but you might have to wait for another election or two. Even then it's probably going to be an ill-fitting political answer to a scientific peril.

They say (who are "they"?) that every cloud has a silver lining. In this case the gathering clouds of climate change seem to have delivered Canada from the clutches of Scheer. I guess we should take what we can get and be at least a little grateful for our deliverance.

While you're waiting for that climate change epiphany to sweep through the land, maybe you should consider the suggestion from Stephen Lewis and David Suzuki and join an Extinction Rebellion march to occupy parliament.
Posted by The Mound of Sound at 7:24 AM

Well, I suppose all of us who have an interest in mitigating rapid climate change and overuse of Earth's resources for our particular civilization as an everyday reflex, need to occasionally have a pause and a think. We also need some framework around which to arrange our overall views that is internally self-consistent -- at least, I do.

For this, I re-read articles by one Dr T P Wilkinson. Besides in-depth critiques and reviews of new history texts and even opera performances, effortlessly written out of the knowledge he has crammed into his head, he recently posted an article on Extinction Rebellion that hit home. But there are essays going back years which exhibit his intellect on many issues.

As an American of British parentage who went back to Europe and taught in Germany, followed by his current retirement in (O)Porto, Portugal, he is quite unlike anyone else I spend my time reading carefully, and there are only a few worth bothering with doing that in the first place. So I don't bother to re-read anything much but his prose, because frankly, the stuff is from lesser minds. Not another soul, in my view, comes close to his trenchant observations, no matter how much they think of themselves, or how many brain-dead sychophants follow them. Speaking of which, I admit being a sychophant for Wilkinson and happily so, because I have been unable to find chinks in his arguments, Those who might claim to do so, and I've found precisely no one willing to tackle such an obviously daunting task, haven't read him closely enough -- it's pretty obvious after reading several dozen articles over the years that you ain't gonna catch this man out with smart repartee that just occurred to you, or that you dug out of your store of cliches which haven't been updated in years. You'd have to do a lot better than that and get really serious. But that's work.

"While you're waiting for that climate change epiphany to sweep through the land, maybe you should consider the suggestion from Stephen Lewis and David Suzuki and join an Extinction Rebellion march to occupy parliament." So should you my dear instead of sitting in your comfortable pew while telling others what to do.

He does sound interesting, BM. I'll try to check out his writings. At the moment I'm trying, without great success, to work my way through a stack of overdue reading.

Anonymouse, I wasn't aware you were apprised of my efforts. Obviously you're not but don't let that stop you coming off like an idiot. You do seem practiced at it.