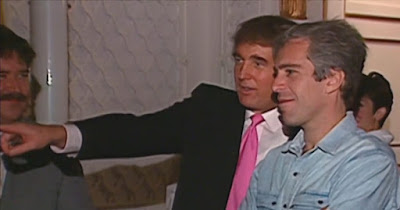 It caused jaws to drop when, just before the 2016 presidential election, an audio tape was released in which the Republican candidate bragged to a TV host named Bush that being a celebrity meant he could just kiss women and "grab them by the pussy."

Trump was quick to deny he'd ever done anything of the sort, dismissing it as "locker room talk." Christo-fascist evangelical preachers uttered a sigh of relief heard across the American  south.

Now there's a new book out - "All the President's Women: Donald Trump and the Making of a Predator." The book, it is said, chronicles 43 instances of Trump being Trump and women being left with bruised nether regions.


The except doesn’t dig into all of those allegations, but it does detail a story by Karen Johnson, a woman who says she attended a New Year’s Eve party at Trump’s Palm Beach, Florida club. At the time of the New Year’s Eve party, Trump was reportedly dating Melania Knauss, who he would later marry, and engaging in what the book called “a wave of allegedly unwanted touching.”

After midnight, Johnson said she was preparing to return home with her ailing husband and a relative. She went to the bathroom, and as she walked out, she said that Trump pulled her behind a tapestry.

“I’m a tall girl and I had six-inch heels on, and I still remember looking up at him. And he’s strong, and he just kissed me,” she told the authors of the book, Barry Levine and Monique El-Faizy. “I was so scared because of who he was... I don’t even know where it came from. I didn’t have a say in the matter.”

After the alleged incident, Trump repeatedly called Johnson, offering to fly her to New York for the day. She kept turning him down, and eventually, the calls stopped. Johnson told her relative about the incident, as well as a friend; the authors of the book corroborated Johnson’s account with her friend.

She was afraid to tell anybody what had happened, for fear of being told that she must have “asked for it” in some way. But when she heard the “Access Hollywood tape,” Johnson said she was shocked.
“When he says that thing, ‘Grab them in the pussy,’ that hits me hard because when he grabbed me and pulled me into the tapestry, that’s where he grabbed me — he grabbed me there in my front and pulled me in,” she said.

I never could get the motivation for "locker room talk" or the appeal of listening to it. There are few things I've found more annoying than hearing some high school jock bullshit about his misbehaviour towards some generally unnamed female while he waves his pecker around or slaps some other jerk on the ass with his wet towel.

When I got to the steel mills and carbon black plants I found that, with very few exceptions, even the assholes among the grownups there weren't much interested in this type of exercise. It must be something more specific to the golf and country club set and other such gentlemen.

If you’ve ever experienced the pain of an emotionally dead relationship or if you’ve ever had a man suddenly pull away and shut you out...

Then what you’re about to find out will completely change the way men treat you and even how YOU experience relationships.

Because at the end of the day, men secretly want just one thing.

And once you understand this one crucial craving that men have…

In fact, this one secret male obsession is the biggest key to being truly irresistible to a man... in a way that goes far beyond physical attraction.

And when you know it, you’ll never struggle to keep a man interested or connected on a deep emotional level the way most women do.

Thousands of women who discovered this one male desire have used it to turn hopeless situations into the life fulfilling relationships they always dreamed of.

The kind of loving companionship and exciting romance that you deserve.

Then click the link below and watch the free version while it’s still up:

==>Next time your man shuts you out do this

You’ll be glad you did.