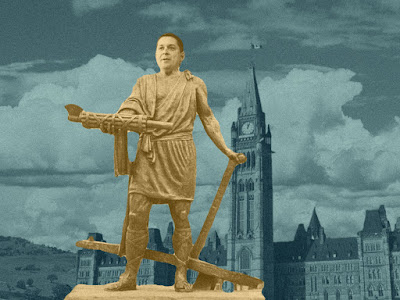 The headline says it all - "SCHEER AMBITION: The Private Sector Months. And Then - to Government."  It's apparently the first in a series on the life and times of Chuckles, our would-be prime minister.


Andrew Scheer has a problem. No one likes to be labelled a career politician — particularly not a Conservative. The conservative ideal is Cincinnatus, that noble Roman who left his fields to save the Republic before returning once again to his plow. But the Conservative leader is neither Cincinnatus nor silver-tongued Cicero. Nor, as his zig-zag to power shows, is he Voltaire, the defender of free speech whose mantle Scheer has often sought to don.

...It stands to reason that Cincinnatus might have had a more difficult time taking power had he been revealed to be a resume-padding stable boy, but ultimately no one is likely to have supported Scheer due to a sterling career peddling supplementary hail coverage anyway. His qualifications, for good or ill, are political. 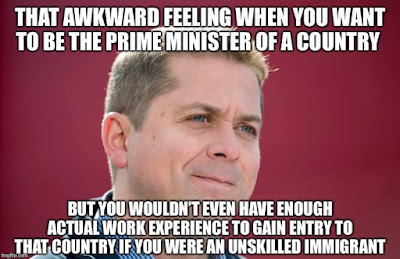 Email ThisBlogThis!Share to TwitterShare to FacebookShare to Pinterest
Labels: Andrew Scheer, The Tyee


It's enough to make you weep.

.. well well .. it is 'to weep' .. Rick Danko and The Band.. somehow missing Robbie Robertson
'as the gambler said.. read em and weep' From 'It Makes No Difference'
https://m.youtube.com/watch?v=uSHzODm-Ik8

We aint lookin at much difference.. though its a Liberal guy with much promise.. slackin off.. and a cardboard Conservative slug insurance not broker who offers nothin.. Does it make any diff ? We gettin dick.. mebbe more than Indigenous Children.. who are now jammed into the courts by their elected 'Public Servants' .. who will enrich law firms and lawyers.. just as Harper did.. to not make a promise happen.. but they 'job churned' our future.. and bought US a decrepit pipeline to Asia.. with our money.. read em and weep..

But hey we got Dame McKenna to rain sunshine on us.. she better than Peter Kent at doin that

Climenhaga over at Alberta Politics nails it as well, today, Mound. if CAPP get their wish list, Canada blows our emissions levels sky high and out our ass. 11,000 lobbyist meetings 2011 to 2017.. do the math.. this is horseshit salad & hold the tomatoes and lettuce.. i care about the Trudeau brown, black or red face not so much.. or the astonishing innuendo pumping from social media scumbags.. its outrageous to do so without any factual basis.. echo chamber garburator residue.. I have already whined to a few trusted actual journalists.. not including David Akin or Warren Kinsella.. perhaps belonging in the 'journalist' category Ezra Levant..

We need our Science, our Biologists .. our Educators, our Healthcare Exemplars to be paramount.. not creepy backroom political slugs or lugs like Kenney, Ford .. we need to run in REALITY .. walk in beauty.. find our better angels.. and screw dirbags & scumbags, robowanks n datawanks.. crankin through our personal data.. via Political Party DataTheft & winnowing for donation or votes.. or partisan favor.. These are nasty times.. scumbaggery and fluckery abound.. I don't weep.. I puke about this crap, wipe my mouth.. and head to the barn.. the calves give not a shit re my whine.. at feedin time.. they count on me to deliver..

It is one giant shitshow, Sal. Yeah, I noticed that Kinsella is in overdrive with the innuendo smear job. I'm not sure why he reminds me of a Fenian but he does. His vendetta is getting a bit puerile.

You've gotta love him. The "insurance broker guy" stuff even outdoes the "computer guy" shit they claimed for Harper when they found out the bosses at Imperial Oil had allowed him to piddle with their Lotus 123 when he wasn't sorting out inter-office memos.

"I'm not sure why he reminds me of a Fenian but he does."

Uncanny. My thought exactly including the uncertainty as to why.

Well then, John, Fenian it is. Great minds...